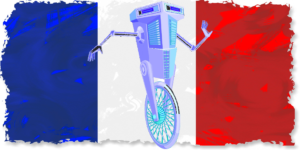 The Tour starts in Düsseldorf on Saturday and finishes at the Champs-Élysées in Paris on 23 July. The organisers of the Tour de France, and Dimension Data announced that they are going to implement machine learning technologies to enhance cycling fans experience of this year’s race.

With the help of complex algorithms that will combine live with historic data, the involved companies will try to provide deeper insights into the race, as it unfolds.

As part of a new pilot this year, A.S.O. and Dimension Data are exploring the role of predictive analytics technologies to assess the likelihood of various race scenarios, such as whether the peloton will catch the breakaway riders at certain stages of the race.

As more technology is introduced into sport, the viewing experience is transforming, and its popularity increases.

At the core of the live tracking and data analytics solution are GPS transponders installed under the saddles of each bike. The data collected from these transponders is combined with external data about the course gradient and prevailing weather conditions to generate insights such as live speed and the location of individual riders, distance between riders, and composition of groups within the race. This year, the solution will create and analyse over 3 billion data points during the 21 stages of the Tour, a significant increase from last year’s 128 million data points.

· 198 riders in 22 teams will generate over 150 million geospatial and environmental data readings along the 3,540km route.

· In 2016 there were 6,100 hours of TV broadcasts in 190 countries across 100 channels globally. Thanks to A.S.O., the number of TV broadcast hours will increase from 80 in 2016 to 105 this year and the race will be broadcast starting from the first kilometre of every stage.

· Cybersecurity is a top priority for the Tour de France. During the 2016 race, Dimension Data’s cloud-based security system flagged 1,409,769 suspicious access attempts which were blocked.

Learn the Fundamentals of Local SEO

(Not)Petya: Ransomware on the march