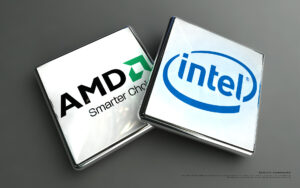 At the beginning of the ramp to the now dominant X86 platform Intel needed a partner to assure growth. Companies considering the technology didn’t trust Intel, which was relatively new and small, to meet their needs. They needed a second source and Intel licensed their technology to AMD to provide that second source. When the companies have most viciously clashed is when AMD either wanted to become the market leader and/or when Intel lost its way and AMD naturally moved up. AMD fell back when it struggled with strategy and Intel executed.

The last time AMD appeared to truly surge was when Craig Barrett was CEO at Intel. Like a lot of new CEOs, he wasn’t properly trained into the role and attempted to aggressively diversify the company which weakened its core lines significantly. This allowed AMD to gain significant share and, to counter, Intel allegedly used its market power to lock AMD out of the market. This has happened so often there is actually a book on this called “Slingshot: AMD’s Fight to Free An Industry From The Ruthless Grip of Intel”.

Currently, Intel is run by Brian Krzanich, a CEO that also seems ill suited for the job. This latest CEO has made an impressive number of rooky mistakes in his first year and this once again provides AMD with an unusual advantage.

I must admit, in a few short years Brian Krzanich has done more damage to Intel than AMD has been able to do, well ever. It continues to surprise me that Intel’s board leaves him in the job given the firm, at least used to be, pretty unforgiving when it came to employees acting against Intel’s best interest. We got an early warning of this when Krzanich announced a restructuring plan, with surplused employees and significant belt tightening and a significant raise for himself. His argument was that he was substantially underpaid against his peers. The optics were horrid, and he lost the support of a considerable number of folks because he didn’t grasp a CEO’s primary income is in stock and equivalents not salary. I should point out that Krzanich is a big fan of the concept of Meritocracy, a term that many ill trained executes didn’t realize was not only first coined as something to avoid, but highlighted in the book “Technically Wrong” as one of the concepts driving employee abuse and discrimination (not to mention lower quality).

He then went on to launch an Intel funded reality TV show with him as one of the stars in the Maker market, underfunded and under executed, and when it failed, he shut down Intel’s support for these Makers. This had the appearance of looking punitive, you didn’t like my show, I won’t give you any support.

Another early decision was, during the Gamergate scandal, he seemed to back the men who were doing the harassing instead of the woman being harassed. He apologized but never reversed the decision to pull funding from one of her supporters. After taking the job he replaced their CMO with a man who came from retail and seemed to have no experience in Intel’s unique component market, and he eventually seemed to force out the top women executives in the firm. Most recently he has been promoting some women but, generally, it appears he backfills them with men something I doubt is lost by the other women working at Intel.

He shot down IDF, Intel’s developer forum, which was the one annual way that Intel had to assure developer support and highlight the firm’s power and reach. Now Apple and Microsoft are both moving toward ARM on PCs and it is hard not to see a direct relationship.

He also fired his CTO, Justin Rattner, right on top of the poor guy’s loss of his wife to illness (at around this time I spoke to one of Rattner’s friends who said the guy was devastated by this treatment by his firm). Rattner was one of the most beloved Intel executives and had been given a waiver to continue on past mandatory retirement age by Krzanich’s predecessor. Once again, a move that seemed designed to alienate the Intel rank and file and make them more difficult to lead. One of Rattner’s pet projects was robot swarms which were to evolve into defense, industry, and potentially home markets. Krzanich has instead, apparently, focused them on taking over the Fireworks market which is far smaller.

Most recently he covered up sever security problems with Intel’s memory architecture, notified the Chinese months before he notified the US, and sold virtually every Intel share he could sell (while remaining CEO) so he didn’t personally suffer. So, you see, Craig Barrett suddenly looks like a prince among CEOs as a result. (Reminds me about how much better George Bush looks at the moment). I left out the CTS Labs report which seemed designed to just hurt AMD who had been gaining share, but current speculation is that this might not have been Intel, but instead an attempt to successfully insider short AMD’s stock.

So, thanks to Brian Krzanich, Intel’s core microprocessor business is being starved, their marketing is weaker (he replaced their female CMO who understood chips with a guy from Staples who was supposed to give Intel Staples Easy Button) than it has ever been, their ability to execute is compromised by what has to be a massive dislike for their own CEO, and that CEO is under an insider trading cloud.

By the way the Staples guy’s idea of a great campaign was to take the one person out of the Big Bang Theory famous for bad advice and make him their spokesman. Crazy or crazy like a …, no that was just crazy.

AMD, on the other hand, has just been executing most recently bringing out their impressive Ryzen 2 offerings. Functionally equivalent to Intel they also come at a time when CPUs in general are falling off in importance to GPUs and AMD is the only firm that has both parts in the high-performance category. Their unique APU offering which places both technologies on the same part remains market leading and provides a low cost higher performing alternative to Intel’s more mainstream offerings.

Lisa Su, AMD’s CEO, runs her company far more tightly. She doesn’t giver herself raises while she cuts her people’s salaries or lays them off, she doesn’t put herself on TV shows or punish her customers when the show doesn’t do well, she doesn’t back people who harass women, she is increasing her investment in her core business not decreasing it, and she isn’t trying to dominate the fireworks market but is focused on gaming consoles, PCs, and servers. Oh, and she is from IBM, where even the hint of insider trading is grounds for termination.

I am hearing rumors that Intel is again doing things behind the scenes to limit AMD’s access to the market but also that the OEMs are growing a tad tired of Intel’s behavior. This is allowing these new AMD parts to flow into more attractive solutions and, in a way, the low number of them could become an advantage.

Right now, one of the problems with the PC market is there are too many choices which raises buyer anxiety and appears to lower churn. With fewer AMD choices, once a buyer chooses AMD, the next choice is comparatively easy, and this should eventually help AMD’s momentum which has already been strengthening nicely.

Intel is about as weak as I have ever seen the company largely thanks to the near tireless self-serving short-sighted efforts of its CEO Brian Krzanich. If AMD can continue to step up and go after this opportunity broadly they have a decent chance of changing the market dynamic. Given the things Krzanich has done to women, to his own employees, to his customers, his investors, and his nation I’m kind of fascinated he is not only still CEO but still free. But, as long as he is aggressively destroying Intel, AMD has an unprecedented opportunity to take share from their larger, weakening, competitor. They just have to step up to the challenge.

As a side note, Lisa Su should really send Brian Krzanich a “thank you card”, something nice that says “keep up the bad work”. Then again, maybe she should instead thank Intel’s board, it is them that chose Krzanich and has left him in place so long.