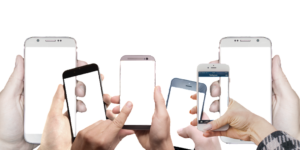 Some things were just made to leak. Basement pipes, old Tupperware in your briefcase, and now, the Pixel 3 XL. Google’s latest flagship was the victim of bad happenstance — or the actor within a series of intentional publicity stunts, depending on how you look at it — as render after rumor after report made splashes on our screens and the inside of Lyft cars.

Bizarre sightings on Canadian public transportation and semi-legit design drafts created a shroud of mystery around the newest Pixel family member—making it one of the most leaked handsets in smartphone history. But not the only one. Deliberate and accidental leaks plague the smartphone industry constantly, so the Pixel is in good company. Let’s take a look at the top leaks to make the biggest splash this year.

The summer is a busy time for most creatures on Earth. The sun’s out, the weather’s nice, and people want to travel. The same goes for the Pixel 3 XL, as evidenced by its itinerant lifestyle this August. First revealed in an unofficial unboxing at the start of the month, the Pixel 3 XL was exposed —along with dongles, accessories, and specs—for all the world to see.

First reported by Android Police, the leak showed off a Pixel sporting a honking notch. It also showed it was in possession of a Snapdragon 845 processor, 4-gigabytes of RAM, and a typical 1440p display.In terms of its look, the Pixel 3 XL mirrors the Pixel 2 XL. The glass inlay and fingerprint scanner were in the same spot as with the previous model, available in an all-white model.

This color isn’t necessarily a surprise for Pixel fans, who were already gearing up to purchase new skins for the latest Pixel. In the past, Pixel skins have transformed an uninspired handset into a slab of marble, a matrix of black matte honeycombs, or a block of zebra wood. These designs (and more) are exclusive to companies like dbrand, which offer unique ways to give your new Pixel 3 XL an upgrade.

Days following this unboxing, the Pixel 3 XL was spotted on a Toronto streetcar then again on the subway. Pics were taken by an eagle-eyed (read here, creepy) Pixel fan, who spotted a man using WhatsApp on the handset both times while riding the TTC. These photos showed off the same notch as the one in the unboxing. The notch was still there when an anonymous person left their Pixel in the back of a Lyft later in September.

The iPhone XS isn’t much older than the Pixel. It was released back in September during Apple’s annual fall keynote. As the youngest model to join the other generations (along with the XS Max and XR), it’s still pretty fresh in our minds. It’s hard not to be as it’s the best performing iPhone thanks to its new A12 Bionic chip — second only to its big brother, the XS Max.

It earns a place on this list because it made history long before it ever made its debut on the Apple campus. Weeks before Apple was scheduled to announce this new phone, two photographs of the XS hit the Internet—and the source was none other than Apple itself.

In a world where mock-ups and renderings are part of the norm, photos aren’t unusual. But they usually come from Reddit users or trusted Apple insiders from Korea — not the manufacturer. This was the first time official photographs of an iPhone have leaked before their launch. Not only did these pics confirm the eventual name of the XS, but they also showed the XS was to come in a new gold color. And there was no second guessing these specs. Since it came from Apple, it was agreed these leaks could be trusted.

Samsung is no stranger to leaks. With nearly every new release of their S or Note lines, there has been some report or unauthorized look at each upcoming flagship. The latest Samsung to make waves is the Galaxy S10, set to hit the market at some vague time next year.

That’s 10, as in the number. Not to be confused with the Galaxy X, the letter and not the Roman numeral ten like the iPhone X. (Phew). The Galaxy X has been followed by the smartphone paparazzi for some time now. It promises to be the first flexible smartphone on the market—whenever its bendable self gets released.

The S10, on the other hand, represents the next link in the S lineage. Though it won’t sport a foldable display, leaks suggest it’s a radical new imagining of the phone. Most notable is the S10’s promised triple back camera, bumping the handsets total camera count to five. Samsung plans to implement a 13-megapixel telephoto lens and a 16-megapixel wide-angle lens with a 123-degree field of view along with the customary 12-megapixel camera. It will be the first of its kind, if these rumors are true.

It’s also rumored to be the first phone to be 5G capable,to rival Apple’s Face ID, and to have an ultrasonic sensor to create a highly secure 3D render of the owner’s fingerprint.

The S10 is expected to be released sometime next year, probably set for the anniversary of the S9. The XS was released in September, less than a year following the X’s release date. Meanwhile, the Pixel 3 XL was released on October 9, just ten days shy of a complete year between it and the Pixel 2 XL.

Between 10–12 months is a long time for these manufacturers not to be in the news. With most major smartphone companies following a yearly cycle to release their next flagship, they have to do something to keep people interested between announcements. These leaks—whether sanctioned or not—are one of the ways to do that. Hurried snaps of blueprints, leaked specs, and rumor stoked by insiders keep people hungry for the next greatest handset.

Consumers and Financial Brands: Why Is There An Emotional Disconnect?

5 Reasons you should outsource digital marketing.