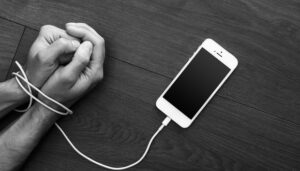 The role of social media in fueling teen depression, anxiety, and even suicide has been all over the headlines recently, and parents have even implicated specific platforms in their children’s deaths, such as this father who blames Instagram for his daughter’s suicide. In reality, though, the link isn’t so simple. Yes, technology has reached peak levels of saturation in the lives of youth today, but it’s also changed their lives in other ways that could be responsible for their distress.

With such serious issues at stake, how do we address this current crisis among teens? In a somewhat ironic twist, many solutions involve added device interventions. With the right combination of apps and controls, many suggest, teens could develop healthier habits.

One of the biggest challenges when it comes to pulling teens away from social media is that their basic self-perception makes them resistant. In a Pew survey of 13 to 17 year olds, 81% said that social media made them feel more connected to their friends – not the alienation that parents and professionals suggest these platforms cause. Unfortunately, this is a self-fueling problem. Teens consider social media vital to their relationships, but it simultaneously can damage self-esteem and fuel loneliness in a more material sense.

If teens are going to insist on using their devices – and parents of teens know how hard it is to manage their screen time habits – then solutions need to be routed through these devices, and one new app thinks it’s solved the problem. Mappen shows teens where their friends are and what they’re doing to encourage them to interact face to face. Maybe a friend is at their favorite cafe or in the park. If teens know where their friends are and see that they’re out having fun, they’re more inclined to go out and join them.

So what’s to keep teens from just messaging each other from different locations, as they’re so prone to doing? The idea behind Mappen is that teens are lonely and do crave social connection, but that they don’t know how to initiate it. Mappen acts as an automatic invitation in an age of social anxiety.

While tools like Mappen could be a powerful counter to teen loneliness, parents have a range of ideas regarding how they could leverage their teens’ tech savvy to reduce negative tech interactions. Trained to research topics online by virtue of the environment they’ve grown up in, mother Natasha Vianna suggests making children research apps they want to download. This means that young people will encounter the potential problems and pitfalls of a tool before they have access to it. Forewarned is forearmed, as the saying goes. And in some cases, disinterest in doing the groundwork may reveal to teens their true priorities; is having this app important enough that they’re willing to commit time to learning about it.?

Ultimately, app use is largely about keeping up with peers as opposed to real connection, when what they really need are more opportunities to engage with their friends face-to-face. Still, telling teens what’s good for them is the fastest way to drive them away from a behavior, so set that aside. Stopping screen addiction starts with strategic discouragement and extends to creating better, more meaningful ways for them to connect with peers. Their devices may go everywhere with them, but our teens shouldn’t view phones as an extension of themselves.

If you ever need a plumber in Auckland