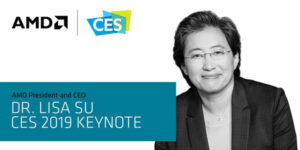 One of the most interesting parts of the AMD keynote wasn’t in her speech but the impressive applause at the front of her introduction when her name was mentioned. AMD has fans, and I think to a large extent, so does Dr. Lisa Su. At a time when we are questioning the motives of a lot of our leaders Dr. Su is one of the CEOs who stands out by doing what all CEOs should be doing and focusing on making her company, her products, and her people better. She is someone all CEOs should aspire to be, and I wish there were more like her.

This is AMD’s first CES keynote and it comes after Ginni Rometty’s impressive keynote a day earlier, another CEO similarly trained and focused, spoke on Deep Data and Quantum computing. These powerful women are showing the world how this job could be done and the fact they were both trained in IBM, a company known for integrity and execution for most of it over century long existence, is telling.

Let’s talk about what Dr. Su spoke to.

Like Rometty, Dr. Su focused initially on the massive amount of data and connected devices that currently and will exist in the future. To focus on the problem of managing and making use of all these devices is clearly the goal of both AMD and IBM. She argues that to do this you need to innovate and used Moore’s law, not as a goal, but as a limiter that most be overcome. This was elegantly done because Moore’s law is tied to Intel and Intel is badly broken at the moment. Its last CEO was terminated in disgrace, they have been tied up in foolish litigation, and have been having huge execution problems as a result. (One of the common questions at the show was Intel’s inability to find a new CEO, even if Intel wanted to do a CEO keynote, they don’t have a CEO to do it).

According to Dr. Su there are 1.5B PCs in the market and this market is actually doing very well. We’ve had launches all week from PC vendors who have shifted to a design forward strategy and who are bringing to market an impressive number of new and ever more attractive designs. One of the interesting facts this year was AMD had a massive number of design wins this year.

In 2017 AMD took the lead with high performance desktop processors with Threadripper. AMD had, until then, been viewed as only a value player. They suddenly emerged as the market leader catching Intel sleeping because Intel had shifted resources to things like modems, drone swarms, and cameras for cars that had nothing to do with their core business. AMD won by focusing on their business and because Intel lost focus.

The showcase was a film from Fox VFX Labs talking about how Threadripper was critical to their Avatar Movie sequel. But this is in a workstation class product and most of us use laptops today.

Currently, AMD has the most powerful desktop processor for laptops. I mean you could argue that few, that aren’t engineers or power gamers, don’t care about desktop PCs, but nearly everyone else has a laptop. Their unique APU, a blend of CPU and GPU, and its performance is what drove what was a huge uptake in every major PC vendor’s lines. Yes, Intel remains dominant, but that dominance was massively reduced this year.

One of Dr. Su’s passions is evidently education and STEM. She ran a video, with an impressive number of women in it, all working on building robots and increasing their STEM skills. One of the big problems in the industry, and by this, I mean the technology industry, is that we don’t have enough women engineers. They have been working with both Microsoft and Google’s education efforts to expand help for students learning STEM.

Chromebooks are increasingly used in education and AMD has had a number of design wins in this area.

One of the core markets for AMD has always been video games. They dominate the console market with something that has approached 100% market share at times. A lot of folks thought consoles were on the decline, yet Sony just announced that they sold a record number of PlayStations last year and it wasn’t even a new console. Currently Sony leads with VR which is considered to be the next big thing in gaming and their presence here at the show was impressive.

On stage they had Microsoft which has been working of late to provide cross platform compatibility for Xbox games. Currently their latest version, the Xbox X, will play games going back to the Xbox 360. And, increasingly, new PCs can play Xbox games suggesting that gamers will get a far better value with their platform. They are massively ramping up Project xCloud, an effort that is designed to allow people to play Xbox games on any platform. Satya Nadella, I should note, is another CEO who has performed near flawlessly and provided another example for how that job should be done.

Lisa pivoted to talking about the RX590 and spoke to FreeSync, their free monitor enhancement technology. Both provide affordable gaming on desktop form factors. They arguably have one of the strongest software efforts surrounding their graphics products providing gamers with an impressive number of options.

Here they are announcing Radeon VII the world’s first 7nm gaming CPU. (I expect that every time AMD says 7nm someone at Intel has a heart attack because Intel has been unable to execute on their roadmap for processor improvement). As a side comment, both NVIDIA and AMD are running hard against each other, NVIDIA also announced impressive advancements at this show, and Intel is trying to catch and pass both companies from behind. I frankly don’t think it is possible to catch two companies running flat out against each other from behind and Intel isn’t even in the race yet.

They showed a number of impressive games and had Ubisoft’s Division 2, not yet released, on stage. Impressively realistic visuals at 4K (it reminds me that I really need a 4K gaming monitor and the 55” and 65” gaming monitors from Dell and HP respectively are on my lust list). Oh wow, not only is this game being provided with these new AMD Radeon cards but everyone in the audience is getting a copy (this means I sure won’t be missing any AMD keynotes going forward). Suddenly Lisa Su is Oprah!

She transitioned to eSports and FNATIC who makes League of Legends one of the most popular eSports games and they indicated that their teams must qualify with AMD hardware. Prize money goes up to an impressive $25M and clearly AMD is very focused on this segment. I’d missed that awards had become that lucrative, no wonder a lot of my friends’ kids want to leave school and go into eSports (well that and, well, and Video Games are a tad more fun than going to school).

Cost for the new Radeon 7 is $699 and come bundled with three games.

I love it when folks use this old Steve Jobs tools. The one more thing is a game streaming service from the Google Cloud for Assassin’s Creed. Google is apparently using AMD’s new cards to power their Project Stream effort (this is the first I’ve heard of that service).

AMD made an impressive argument behind their statement they love gamers better than anyone else.

EPYC is AMD’s industrial CPU product focused on business and likely is part of the reason why Google is using. This product has been carving an impressive entry into what has been one of Intel’s strongest markets. Dr. Su showcased OSU and their work using EPYC level performance and then she announced that this year they will be announcing a 7nm processor that will be the best high-performance processor the world has ever seen. (I can picture Andy Grove’s ghost screaming at Intel’s dysfunctional board, “wake up People, AMD has become an existential threat to our company”).

To make her point the demonstrated the performance of one AMD EPYC against two Intel Xeon 8180 and it trashed them running about 15% faster. This would be like a 4-cylinder engine trashing a V8 (which, come to think of it, I do regularly with my 360 HP Mercedes 4-cylinder car).

Ok, two One More Things? Dr. Su is really pushing the envelope here. They showed a demo of their 3rd generation RYZON desktop processor and Radeon 7 and it was amazing. (Given how early this technology is I’ll be everyone was surprised it didn’t crash).

Then they again trashed Intel’s shipping processors on stage both in performance and energy savings. Impressive demo particularly given that the AMD part isn’t at full power yet. The point here is that AMD has been able to get their 7nm process to work while Intel hasn’t been able to advance.

I don’t think I’ve seen this many shots at Intel in a single presentation ever and, without a CEO, and with a cloud tied to their litigation with Qualcomm, I don’t think Intel is capable of responding.

It is amazing what a company can do when they have a strong CEO that is focused on the business. Dr. Su remains one of the gold CEO standards and she certainly showcased this at CES this year. Solid efforts in both the CPU and GPU categories, impressive design wins, and not one but two “one more things”. Once it was said that you shouldn’t bet against Intel, this year, I’d say you shouldn’t bet against AMD.

2019 is going to be an interesting year.

The IOTA co-founder Serguei POPOV is taking his place at the Blockchain Economy Istanbul Summit!