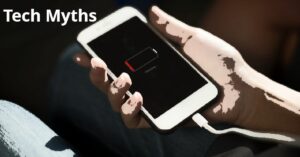 Many of us do not know how the technological items we use every day really work. We do not care how exactly the battery of our iPhone functions, but we believe that it works properly. A survey carried out by HighSpeedInternet has interviewed hundreds of persons. The goal? To understand which beliefs persist in the field of consumer technology. Let’s see then which are the 5+1 myths to debunk about technology in 2019.

6. The Smartphone can be Recharged only if Completely Unloaded

Not only you can charge your phone at any time, but it is not even optimal to wait until it is at 0%. The battery has a finite number of times it can be fully charged, usually 400 cycles. If you partially charge the smartphone, you only use part of the charging cycle so that you can extend the battery life. In this way, you will be able to use your phone more, for example for checking online shopping websites, reading online magazines.

Smartphone gaming and video streaming are both sensitive subjects when it comes to battery life, as phones are supporting all types of titles and streaming apps in high resolutions. If you’re using such apps, charging the phone partially can be healthy for your battery. This becomes more obvious when you’re playing resource-intensive games or even watching football live streams via sports betting apps after finding a reliable site in India to bet on . Moreover, lithium-ion batteries, the ones used in most phones, last longer if they are charged from 30 to 80%.

5. Charging the Phone at Night Ruins the Battery

Nowadays, charging the batteries of smartphones all night will not ruin them. Years ago, overcharging the battery cells could cause overheating or deterioration of their life cycle, but fortunately, there have been progressions since then. Have you ever noticed that when you pick up the phone in the morning, the battery level is often 98% or 99%? The reason is that after reaching 100%, most phones stop taking energy.

4. Macs can’t get Infected with Viruses

One of the myths that survive the longest, but is fake. For instance, a Mac can have viruses. Maybe they do not take them as often as the PCs, but it does happen anyway. The first Macs had two significant advantages: the source code was harder to break, and the percentage of people with a MacBook or desktop version was so low that it was not worth creating a virus for them. Today, with thousands of these devices spread in homes and offices, hackers and cybercriminals are also focusing on them.

3. The Computer Must Be Turned off When Not in Use

Turning off the computer every night does not affect its operation. Modern computers have less mechanical components, and better energy management than previous devices and this progress minimizes the effects of stopping and restarting. Although you need to restart the PC occasionally to install updates, you do not have to do it every day.

A multi-megapixel camera can take pictures with higher resolution, but this does not necessarily mean that they are of better quality. The lens and the smartphone sensor play major roles in the final rendering. Just a simple example: With a poor lens, but many megapixels, you will have a bad picture but in high resolution. The number of megapixels refers to the resolution of the photo and the size of the image. A higher megapixel number is important if you plan to print a photo in a large poster without loss of quality. For normal viewing, megapixels are not that important, and other features make the quality of a camera, like the light sensor for example.

1. Removing the USB stick from a computer without using safe removal will ruin the stick

This false myth derives from the wrong interpretation of a Windows warning that warns the user of possible problems if you remove an external disk or a USB stick without doing a safe removal. In reality, USB drives can be freely removed from a computer without problems in most cases and from any computer. Only in one case there may be problems: If we unplug the stick while we are transferring data, or immediately after the process is finished, or if we have left some document of the USB open on the PC, then there is the possible risk that the data saved on our portable device will be damaged.

Reasons why you need to attend the SXSW event 2019 in Austin, TX.