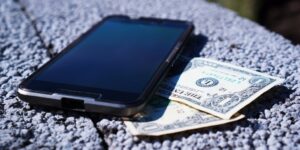 A Smartphone can be used not only as a means of communication or a source of entertainment but also can be used to make money. This can be done by using some kind of money-generating app that can now easily be found on Google Play. Applications can help Android Smartphone users to earn money either in cash or in the form of points that can later be used for various types of needs. The amount of money generated is not too large and cannot be categorized as a source of income, but quite useful to cover some of the expenses required to pay bills of mobile use every month.

Ebates is known for its cashback offers across various hopping website. It is actually not a shopping website. But they offer cashback if you purchase anything through their affiliate links of various website. It is one of the most popular apps and it is not amazing that it is posted in top 3 at many money making apps rankings. You’ll still earn $5 for everyone you get to sign up. If you could find 100 people to join you would get $500 for your hard work!

IPoll also offers the same way to make money from Android is to complete the survey. IPoll is not only available on Android applications, but also we can access through the web by visiting the official site of iPoll.

IPoll will ask you to enter information regarding your personal data (such as your name, hobbies, residence etc.). Surveys will be provided based on the personal data you enter. Each survey will be given points; points earned can be penalized with money through the site www.iPoll.com. The survey given in iPoll is uncertain when it’s time, so it can be 1 month 1x, can 1 week 1x. Depending on the information they provide at the beginning of the registration, for a premium country like USA there will certainly be more surveys than we who live in a developing country. It is the top app posted at HuffingtonPost.

Swagbucks is one of the biggest sites that provide gift cards for every task you complete. Since its launch in 2008, it has been more than $ 90 million (900 billion rupiah) paid to its members. So no wonder if Swag bucks is considered as the best money-producing app in android today. There are many ways to earn money from Swag bucks android apps, for example by: Completed the survey watching video Shop at ecommerce site.

The easiest way to get the most money from Android in my opinion is with the Mint Coins app, the system is almost the same as Whaff, but there are more tasks offered by Mint Coins apps to make money, for example: Completing the Survey Watching video Installing App .Invite a Friend Sign up on the Website The payout you will get from each task is different, depending on the difficulty level of the task, but the average is between $ 0.1 – $ 5 for each given task.

Google Opinion Rewards is a money-generating app from the second android I recommend for you, especially for those of you who need Google Play credit. Although, there are many ways to make money with Google, this one is not the highest paying, but probably the easiest. To earn money from Google Opinion Rewards, its easy enough, you just need to answer surveys, and surveys will be given once every 1 week. Questions or surveys given are easy to complete, for example you will be asked: Which logo is best? What is your favorite food? When is your plan for a vacation? Like that, so it’s pretty easy to do. For the income earned can be up to $ 1 per survey. 1 survey usually consists of 1 – 20 questions.

The working of this one money-making app is quite similar to the MintCoints app, where users have to complete multiple missions to earn money. The missions can include watching videos, downloading apps or other simple missions. The number of missions offered will vary greatly and is more limited because the required surveys require everyone to be or stay in a specific location, region or country. Money earned from this application can be availed through PayPal account after reaching certain nominal in accordance with existing terms and conditions.

Buzzinga has a work similar to AppCasher. Buzzinga apps developed by App Media will reward users who have downloaded and reviewed an app. The more number of applications downloaded and reviewed the greater the number of points collected. These points can then be redeemed with gift cards from Amazon, GameStop and Starbucks or can also be used to participate in the draw to win prizes such as Smartphones, UltraHD TV and many other gadgets. Various types of applications that have been mentioned above is a moneymaking application that is quite popular and get a pretty good review of its users. How it works and the system applied by each application is quite similar where everyone needs to do something in order to get the money you want.

What You Shоuld Know About a Binary Option Robot