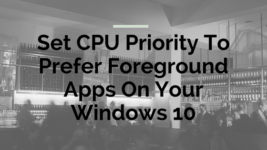 Do you like to improve the performance of your Windows 10 PC using foreground Apps? Everyone might have experienced the low performance of their Windows 10. We often think that the there are few functions running in the system background that slows down the whole system. However, you need to understand that Windows 10 runs a number of processes in the background. Each task or process has separate priority level fixed so that it would be easier to operate accordingly. Priority level in Windows 10 PC will be fixed based on many factors such as

Ø Amount of time taken to run the Apps

Using these methods, we can change the priority level in the Windows 10 and subsequently paves ways for improving the performance of the preferred App in much easier way. Priority levels in the system could be changed with resulting changes in the time taken to run certain application and amount of processor that consume.

How To Change CPU Priority In Windows 10:

5. You will notice System Settings on the screen

10. Adjust the best performance in “Programs”

Prefer Foreground Apps Using The Value Of DWORD In The Registry Editor:

You will learn to set Foreground Apps in this section using the change of DWORD value in the Registry Editor. Follow below instructions given below

3. Paste this given command in “Registry Editor”

4. Now “Priority Control Key” explains foreground priority differential. The default value for “Win32PripritySeperation” will be REG_DWORD set as 0, 1 or 2. This specifies the number of priority with providing complete Foreground Apps.

5. Change value of “Win32PrioritySeperation” to set foreground Apps based on the priority

7. You will see value data

8. Set as 18 the value data for setting the performance of foreground Apps

You have to change the value of DWORD in Registry Editor successfully to set the Foreground Apps on windows 10.

Top Tech Tools for Your Business