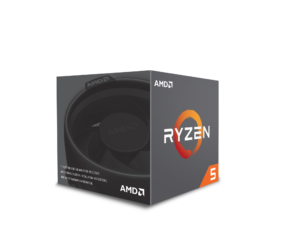 The second of the coming AMD Ryzen lines has launched and this one may hit the sweet spot for those looking to build a gaming system on a budget. Having between 4 and 6 cores, and, depending on model, these fall under the 8 core Ryzen 7 at much more attractive price points starting at a reasonable $169 for a 4 core 3.2 GHz part and topping out at $249 for the 6 core 3.6 GHz part. My personal favorite is the Ryzen 1600 which is a tad slower at 3.2 GHz but has a 3.6 GHz boost speed and comes with their new lighted Wraith Spire fan resulting in a low-cost system build for those that aren’t yet ready to try a water cooling system.

Let’s talk about why saving a few hundred bucks on a Ryzen 5 might actually make more sense.

If you are like most folks lighting up even 4 cores isn’t a common occurrence. This is changing however and increasingly I’m seeing activity on every core I have but I run the advanced Windows Builds and a ton of background apps. I’m not like most users but I may be where you will eventually go. But it is doubtful you will really see even much benefit from 6 cores initially, they’ll just provide you with headroom as you move to the newer apps and assure that the system you build won’t obsolesce too quickly. The Ryzen line starts with the 4 cores you likely will make the most use of today and then moves to 6 if you want to build for the future. This makes in an ideal middle of the road line until you decide if you want to go all out or not and the money you save on the processor can be better spent elsewhere.

One of the OEM stores that is floating around and the moment is that most people that are buying mid-range gaming rigs are making stupid tradeoffs. They see a 4 TB drive and choose it as a value buy and couple it with a high-end processor from AMD or Intel and then complain that everything seems so slow. It isn’t the processor, it is that damned huge magnetic hard drive. You really don’t need all that much storage and would be better off keeping your file repository down as it makes searching far faster and you can then afford an SSD drive which is far more capable of supplying data at the speed your processor can consume it.

Now that is also one of the reasons I like the 1600 Ryzen 5 because you can drop $20 to$30 on an air cooler that works and also looks good. I mean what is the point of doing your own system build if you can’t be proud of the result? The new AMD Wraith Spire is surprisingly good looking and it was designed to cool the Ryzen processor. You get it as part of the 1600 bundle and the end result is a lighted fan that showcases that you have one of the new Ryzen rigs.

Sometimes it is about choices, if you are building a high-end rig and have the budget then going with a high-end processor is a must. But if you are like most folks and on a budget then it would make far more sense to buy a mid-range processor like the Ryzen 5 1600 that comes bundled with a nice-looking fan and use the money you save to up the performance of your storage and graphics card, it might not hurt to buy some more RAM as well.

In the end, it is often about getting the most for your buck which is why many of us, including me, have bought Core i5s over Core i7s for some time, now you get a choice and you might actually prefer a Ryzen 5 instead.

5 Ways You Benefit from Music

DO YOU HAVE ENOUGH HEALTH INSURANCE FOR RETIREMENT?