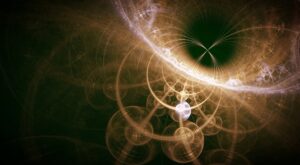 Arguably, the reconciliation of General Relativity and quantum physics is probably the most difficult endeavor theoretical physics is encounter. Generations of brilliant physicists tackle this problem, but until now no notable results have emerged; unification of the two pillars of modern physics remains a beautiful dream. What if, in the absence of unification, spacetime and quantum information may concur and work beautiful together, as a team?

General Relativity and quantum theory, the two pillars of modern physics, although notoriously difficult to reconcile, may beautifully work together, as a new paper suggests. Moreover, the spacetime curvature and twisting create, manipulate and communicate quantum information encoded in light.

A recent article (Quantum gates implementation by X-ray single-photons around rotating black holes – https://arxiv.org/abs/1702.04640) pointed out a different angle of view the problem asserting that the spacetime shape (curvature and twisting) could literally process quantum information encoded in light. Roughly speaking the deformation of spacetime out of the straight Euclidean line may encode quantum information in photons traveling in that particular region.

The unique shape of spacetime required in order to execute quantum information processes may be encountered in regions close to spinning black holes, as the ones presumably living in the center of every galaxy. The rotating black holes dramatically alter the very fabric of spacetime in their vicinity. These ghostly astrophysical bodies drag and curve the spacetime around to the extreme.

Light travelling close to the spinning black holes is constrained by the deformed spacetime to encode and process quantum information pretty much like the information is manipulated in ordinary home computers. Following the curved and twisted lines of the distorted spacetime photons encode quantum bits of information in defined sequences that could make one to think of computer program lines of a code. When eventually escape the black hole influence, photons in the light beams are endowed with simple quantum codes that we may interpret and asses the information they contain by quantum computers.

As the quantum computing era approaches, we are entitled to hope that sooner rather than later we may comprehend the vast quantum information the Universe is filed with.

Nature is telling us a lot more than we can understand at this moment.

6 Types of Insurance You Need for Your Business

The 6 Best Business Apps For Your Phone