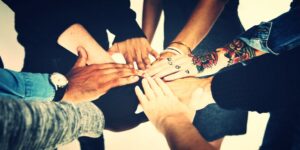 This falls into the area of a company doing something good that will also have a significant positive impact on revenues and profits. It should also have a major impact on how we perceive and react to diversity. What triggered this piece is that HP just completed an impressive study that showcases our perception of the American family is wrong.

This is the latest in an ongoing effort by the company to change diversity related perceptions and it follows a series of efforts that were initially focused on increasing diversity in HP. The interesting thing is that HP has discovered that Diversity in employees and families is no longer the exception, but it is the rule, yet our perceptions have not evolved to yet accept this new realty. That is likely one of the big reasons why there is so much intolerance and discrimination visible right now, the majority with this bad behavior has become the minority and new majority doesn’t like it, nor should they.

HP appears to not only be embracing this new reality they are positioning to benefit from it by becoming an advocate. If most employees, customers, and investors are, in fact, diverse than they should favor a company that embraces their diversity. And given the severe labor shorting in the technology industry, this effort and view should significantly increase HP’s ability to staff up over their peers.

I was only going to focus on their latest campaign, but I’ve seen the other efforts, and each is worthy of comment let’s take each one in turn.

Let’s Get In Touch: Eliminating Bias Against African Americans

We have more jobs than we have people to fill them, particularly in the technology segment. Yet African Americans are 3x more likely to be denied a job they are qualified to do. That isn’t just wrong from the standpoint of discrimination, it is wrong from the standpoint of the firm’s bottom line because it means someone less qualified is actually getting the job. Just as important the effort showcases the pain that African Americans, and other minorities, experience because they don’t know if the rejection was because of their color or some other, perhaps fixable, deficiency. And even if the firm disclosed this deficiency there is a reasonable chance the candidate would still feel they were being discriminated against. The example HP is setting is that they are getting out front of this and saying that if you go to work for them they’ll celebrate your diversity not reject it working directly against the perception that the hiring manager is racially biased. This is the related video (it is worth watching), but it is on top of internal changes and recurring training in HP to overcome racial bias in hiring.

Building on this fight against bias but shifting from African American’s and racial minorities to women HP’s next effort focuses on eliminating misogynistic hiring practices. If you are a woman, empathetic man, or have a daughter the video on Dad’s and Daughters they released on this will likely make you both mad and sad. It is a series of fathers reading some of the common recommendations given, uniquely, to female candidates about how they should behave in an interview. The advice is both sexist and often accurate, particularly in the technology market. One interesting piece of advice, only because it does apply to both men and women, was don’t be too chatty (what made it sexist was the lead in that “women” tend to be chatty, but actually certain personality types regardless of sex trend to this mistake). The not so subtle message is to hire people because of who they are, trying to make them into something else to pass through an interview is stupid. HP once again uses the video to suggest they won’t treat a female candidate in this sexist way. However, even interviewing there, you should spend some time looking at how the rank and file employees dress and emulate that in an interview and the advice to listen more than you talk, regardless of your sex, has always been good advice.

With Proud Portraits they shift again, this time to the LGBTQ community and focus directly on tolerance. This one is kind of interesting because, unlike the first two groups, a person’s sexual preference isn’t often visibly obvious. But that seems to often increase the fear and intolerance surrounding this type of protected diversity. I’ve personally never really understood this as I’ve always believed sexual preferences are, and should be, between yourself and your partner and society should only step in if the result was abusive or predatory. HP’s effort here largely focuses on making folks in this community look non-threatening, the kind of people you’d like to have in your neighborhood or workplace. I know my own personal experience, though limited, has been folks in this group have been some of the best people, in terms of compassion, empathy, and willingness to step up, I’ve ever met. As a result, this video really resonated with me and I’m sure it did with the HP employees once again suggesting HP would be more tolerant than most regarding hiring and supporting people in the LGBTQ community.

Pivoting to the Latino community HP produced a video titled “Latino Jobs” which showcases the difference between what people think are “Latino Jobs” and what they actually are. Showcasing that HP believes that a “Latino Job” is any job that the employee is qualified to do regardless of race this once again features the company as a firm driving diversity. One of the most powerful ways to deal with a false bias like race connected job groupings is to thrust the discord into the believer’s face, force them to see the world for what it is and create doubt which then can be fueled to eventually eliminate the bias. With the massive employee shortages in the technology; market firms can ill afford these false damaging perceptions and HP’s effort to change them to get access to a larger labor pool is both effective and fascinating.

The latest in this effort, The All-American Family, is designed to cause us to look at the world around us in a more tolerant and accepting fashion. This one shifts from a focus on hiring to a bit of a focus on printing. When I grew up the walls were covered by family pictures, we even had that for a time in our own home. But families have been falling apart of late and intolerance is one of the major causes. What is fascinating about this effort is that it is statistics based and showcase just how far from reality our current perceptions are. For instance, 75% of people surveyed believe the American Family is all white and heterosexual with kids, the reality is that only 25% of American Families are all-white, heterosexual, and have kids. One strange statistic was that 95% of the respondents said they were close to their families while around 33% said they cut ties to their families due to intolerance suggesting a large number of folks are living in denial. In any case this video showcases a test where people were asked to build the ideal American Family from folks in a room and they actually built some damn nice-looking families. Then the actual families in the room grouped together showcasing their diversity and also showcasing the difference between reality and perception. (It did make me wonder how many of the men and women regrouped left thinking they might have done better as exercises like this can often have unintended consequences).

In the end this was an effective way to force the audience to see the difference between their perception and bias with the reality that surrounds us.

With so many executives in the news as bad actors of late it is refreshing to see companies step up and try to make themselves better. Employees are the blood of the company, many CEOs seem to forget that, and HP has sadly had a run of them. Current executive management has stepped away from that history and gone back to HP’s roots where the employee was the firm’s most valuable resource. By executing this effort, they not only showcase HP as a better place to work, but also set an example for their peer firms to emulate making the tech market in general a better, safer, place for our neighbors, friends, relatives, and family members. And, hey, if we also take a few more family portraits and print them out on HP Printers, well they are certainly OK with that as well but the theme of a HP as a better place to work and a more tolerant world in general is one that should be encouraged and applauded.

We need more efforts like this if we are to create a world we all would like to successfully live in. I should end this with a shout out to Tracey Keogh, HP’s Chief Human Resources Officer, who I think is the strongest HR manager in our industry and likely behind much of this effort.

What are the Different Kinds of Jewelry Offered By SuperJeweler