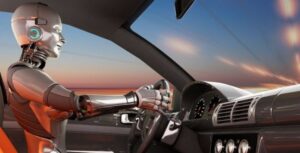 In theory, autonomous vehicles have innumerable advantages. They could revolutionize public transportation systems, improve carpooling to reduce problems like traffic and greenhouse gas emissions, and help would-be drivers multitask rather than focusing on the road.

Even if you assume that self-driving algorithms and safety features are perfect, that still leaves 10 percent of accidents unaccounted for—and those algorithms almost certainly won’t be perfect. There will almost undoubtedly be at-fault accidents where a self-driving car could be determined responsible for the collision. In those cases, someone needs to be held liable for damages, medical expenses, and legal representation when necessary.

So who should it be?

The Case for the Driver

The types of autonomous cars on the market today aren’t truly autonomous; they only have some autonomous features, such as automatic braking when a potential collision is detected. For these semi-autonomous vehicles, drivers are still expected to supervise the vehicle’s operation, taking over when necessary to avoid a collision or ensure that the vehicle functions properly. In these cases, the driver is still held liable for any damages, as they would be under normal circumstances, because they’re expected to be in charge of the vehicle’s operation.

However, semi-autonomous cars are problematic in a few different ways. Relying on the autonomous features, drivers can easily be lulled into a false sense of security, making them more likely to become distracted, and therefore more likely to cause an accident.

It also presents a sliding scale of autonomy; should the driver be held liable if they’re only responsible for the vehicle’s operation 1 percent of the time? What about 25 percent of the time? The diversity of semi-autonomous vehicles available today complicates this dilemma.

The Case for the Automaker

Because cars will eventually be designed to operate without any intervention or supervision necessary from human drivers, many experts believe that the long-term vision makes automakers responsible for collisions from their software. Some automakers are already stepping up and proactively claiming this responsibility; for example, Volvo has claimed it will pay for any medical expenses or damages that occur as a result of its IntelliSafe system causing an accident.

The philosophy here is that the driver is not, under any circumstances, expected to control the vehicle. The algorithm dictating the vehicle’s operation is solely responsible for any “decisions” the vehicle makes; therefore, it should be held liable if those decisions lead to a collision. If that’s the case, it leads to a number of smaller, more nuanced questions. For example, will drivers still need to carry insurance if they’re only operating self-driving cars? Would you be able to get a special license for autonomous driving only? Will autonomous vehicles need distinguishing license plates?

A blanket statement like “automakers should be held liable for autonomous vehicle collisions caused by that vehicle’s programming” may make sense on paper, but there’s still a massive regulatory hurdle to overcome before that problem disappears entirely. Before fully autonomous vehicles can be completely released to the market, we need a set of consistent laws in place all over the country; states need to agree on certain requirements, or travel with certain types of self-driving vehicles would be limited to in-state. It also still leaves the temporary problem of dealing with semi-autonomous cars’ liability.

The best hope we have for resolving this legal complication smoothly is more automakers stepping up to volunteer to pay for any damages and medical expenses caused by their self-driving cars. Not only does it proactively answer the question raised by drivers and lawmakers, it could also make prospective buyers feel safer about their new vehicles, and lead to higher adoption rates.