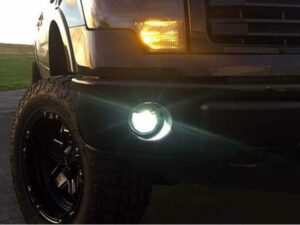 LED fog lights are a major safety feature of cars these days. They have very specific functions in cars, as they allow the driver to see the road clearly along with sharp edges or corners without any difficulty.

Normal driving lights cannot do that as the light they emit is reflected easily by snow, fog or mist particles, and can cause sharp glares that cause the driver to misjudge the pattern of the road. This causes many accidents, which can all be avoided if the driver had decided to use fog lights instead.

LED fog lights are potential life savers but their uses are quite limited.

As mentioned before, normal driving lights are reflected by small rain and snow particles, which makes it difficult for the driver to see the road and any turns or bumps it may have.

The biggest characteristic of LED fog lights is that they do not get reflected by any particles and keep the road visible to the driver. This makes it easier for the driver to see the road as it is, along with the conditions of the weather without much difficulty.

Not suitable for normal weather

Many people believe that it makes sense to use LED fog lights on normal days, when roads are generally visible.

Although there is not too much harm in doing so, it is now found that LED fog lights pass only a minimum acceptable standard of light that a driver must use.

Other than this, LED fog lights also do not last very long and must usually be constantly replaced. Normal driving lights, on the other hand, last for many years.

Some regions have also declared it illegal to use fog lights unless adverse weather conditions present themselves.

One huge advantage LED fog lights have over any other lights is that they save a significant amount of power. This is where they present themselves with great advantage, especially in bad weather conditions when running out of battery is one of the driver’s biggest fears.

Many cars come with fog lights built in by the manufacturer. Other times, such is not the case. If you are buying LED lights to replace ones that have died down or to install new ones altogether, there are certain considerations that you must keep in mind:

It is imperative to know what fog lights work best, and have been working well for a long time. For this reason, you must read reviews online and know what manufacturers are reliable. Having brand loyalty in these times is a blessing.

Thus, it only makes sense to consider what vehicle you are buying the led fog light for, before making your purchase. You wouldn’t want to suffer only when you have started installation.

Should You Expand Your Small Business?