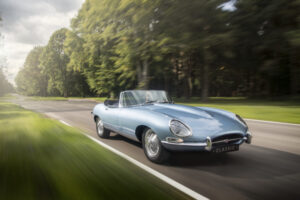 Jaguar is currently market testing an electric E-Type, called the E-Type Zero, based on the 1966 design which was just before the US DMV started to force them to screw it up. Basically, it was the most advanced good E-Type. But, in the announcement, they also indicated that the system they had developed could be retrofitted to any old E-Type (or XK class Jaguar) and this got me thinking that given that suddenly everyone and their brother in the automotive industry is focused on transitioning to electric cars, kits like this may be the only way to keep your classic on the road after 2030.

Let’s talk about why that is and why, if you want to drive that collectible car, you’ll have to convert it to electric in the next 10-15 years.

Before the 1920s we had horses, steam cars, electric cars and gas cars. Clearly horses were going away but both steam, which used kerosene to heat the boiler, and electrics seemed viable enough for companies to build hundreds of them but by the 1930s, steam and electric cars were gone and pretty much off the roads. And the problem with folks who had steam cars is that the people that knew how to fix them largely moved on to other jobs so that keeping them running became more difficult. Interestingly both steam and electric cars were simple when compared to gas cars so they held out better than what would have happened had gas cars not made the cut.

If owners wanted to drive them they had to learn how to repair them on the road because taking them to a shop would likely just result in an apology but not a fix. Though, I expect, an appliance repair man could have given fixing an electric car a shot.

In a pinch you could always still get kerosene though or find a plug to charge your car from.

But fixing a gas car on the road even today is problematic and the folks that can fix a pre-1990s car are increasingly hard to find. Shops are today used to using OBDII readers and electronic diagnostics to determine what they need to do to fix the car but, at least, they mostly have the tools they need to fix the thing.

Leaded gasoline went the way of the Dodo bird some time ago and, today, those running collectable cars must use additives to keep their pre-1970s cars running. Some rural areas may keep supplies of this to run old farm equipment but in cities the need for the additives, let alone filling stations, when the market moves to mostly all electrics will be hard to find and buying gas in bulk and storing it at your house is generally frowned on by both your neighbors and your fire insurance carrier. And god save you if your big tank leaks, that results in a massive hazardous cleanup bill resulting in having to haul away all that contaminated soil. Therefore, having your own gas tank even on a farm underground is mostly not done anymore unless you can afford double walled tanks and regular inspections.

If projections hold by 2025 virtually all cars sold will be electric and we will undoubtedly have decent incentives to get our gas cars off the road (which also may apply to cars that aren’t driven by computer). This means that by 2030 it simply won’t be economical to keep most gas stations open except as car washes or maybe mass charging stations. Your electric car is more like an appliance and generally when an electric car has a problem that can’t be fixed by a software patch it must go to a repair facility that knows the car. For instance, how many Tesla’s have you seen in your neighborhood shop?

Now there clearly will still be shops that specialize in collectables and they’ll be able to repair the car but getting gas for it or getting it repaired if you go on a long drive will mean trailering it back to that shop even for something minor. (Which isn’t that far from what is happening, except for the gas thing, if you 1930 Duesenberg bites it on the road today). But now check out the staff in a lot of these shops that specialize in collectable cars. Median age is typically 50s and in 20 years most of these guys will be looking to cut back if not hang up their spanners entirely.

This means if you want to enjoy your car, particularly if you like driving your post 60s level vehicle, you’ll need to have it converted to electric. And the good news is, the result will be, it should become vastly more reliable and easier to maintain as a result. The exception will be if you want to race it, tracks that support gas car racing, which should hang in there for a while longer, should be able to keep the gas and additives you need in stock but they’ll get a ton more expensive.

And this takes us to the cost of gas. Once we get to a critical mass of electric cars, the volume of gas will drop well below current economic levels and while oil will likely tank in price refining that oil, due to vastly lower volume should massively go up in cost per gallon particularly given it will undoubtedly be under much harsher hazardous material restrictions (the Oil Lobby should collapse).

As a result, you certainly can keep your classic car, but driving it will become excessively costly and your inability to keep it fueled and running problematic. By the way this is on top of the 10x increase in insurance expected by 2030 for human driven cars. (Which the electric thing doesn’t fix at all, but would be offset if you only drive your collectible car, like most do, very rarely).

Wrapping Up: You’re Going Electric Like It Or Not

The car industry has clearly signaled they are going electric (even Ferrari at this point). Almost every car maker has now indicated a massive move to electric vehicles in the next 5 or so years. This means by around 2030 the cost of keeping a gas car running and driving on public streets will be too high for the clear majority of us and, unless you are very rich, you’ll need to consider converting your classic to electric if you also want to drive the thing (except for the track, but the number of tracks has been dropping steadily anyway, and given electrics currently suck on the track…).

So, while Jaguar is ahead of the curve by potentially creating a kit that will convert their most popular collectible to an electric, they aren’t that much ahead of the curve. I also think this is going to do some ugly things to collectible valuations in about 10 years so, if you have a collection, you might want to consider divesting it before that happens or figure on giving your heirs an interesting project. Hey, you had fun collecting them, they can have “fun” finding some bozo to buy them, right?

Are Small Businesses Still at Risk from Cybercrime?

How to find a good lawyer when you really need one