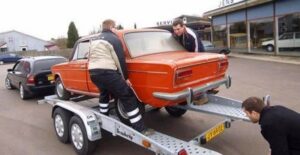 Jens Sorenson ceased trading at his authorised Fiat car dealership in Kolding, Denmark in 1981, exactly 36 years ago. He was faced with two choices by the Turin-based company: either to remain in the family car business or concentrate on heavy goods vehicles. The businessman opted for the second solution and left the dealership with more than 200 vehicles inside.

More than three decades later, one of Sorensen’s heirs brought them back into the spotlight and decided to put the “rediscovered” collection up for auction. Although the cars were clearly in bad condition and rusty and dusty, they attracted the attention of many vintage car enthusiasts.

Many of them sold like hot cakes (the Lancia Beta was sold for 6,500 euros!), also thanks to repairs to their bodywork – shot blast machines, ideal for this purpose, are available on the market – thus allowing the cars, from one day to the next, to get back their shine from better times.

Guide to Writing a Successful Dissertation

IBM Financials:  The Advantages Of Skill And Vision At The Top