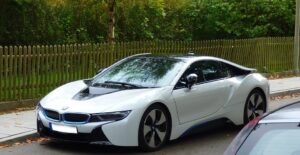 With 2018 quickly approaching, there will be a whole new assortment of cars on the market in Canada, from Audi to Jaguar to BMW, and many of these brands are releasing information on their new 2018 cars. It’s an exciting time to be a driver, with many of these exotic car manufacturers ramping up the speed, handling and overall comfort of their vehicles, making for a better breed of cars.

If you’re interested in anything you see here (and it will be hard not to be interested) you can start looking for an exotic car dealership in Canada by hitting up the internet, finding a trusted auto dealership and asking some questions. For now, though,here is a list of five of the hottest exotic cars on the market:

The BMW i8 is one exotic hybrid power train – not only does this small car have all-wheel drive, but its battery pack can be completely recharged in only three hours from a simple 120v AC outlet.

The Bugatti Chiron is one of the fastest production automobiles in the world, reaching a top speed of about 261 miles per hour. However, with the 1479-horsepower 8.0-liter quad-turbocharged W12 engine, it can definitely go faster. But as fast as the car is, you’re going to have to act faster: only 500 of these are made throughout the year.

With the word “speed” in the name, the Bentley Continental GT Speed has no choice but to live up to its name. Like the Bugatti, this car can reach speeds that exceed 200 miles per hour. What makes it different? This car can seat four comfortably, a feature that very few (if any) other cars in its class can boast.

Going from 0-60 in about three seconds, the Dodge Viper had to be on this list; although it is the least expensive on this list, its performance, limited production and flashy appearance keep it as a contender against these other top dogs. Just like its namesake snake, this car has some real bite!

Straight from Sweden comes the world’s fastest car, going from 0-60 in just over two seconds, but don’t get your hopes up too high, because the Koenigsegg Agera’s limited production of 25 vehicles is already sold out.

All of these exotic cars tend to be a bit pricy, so you can only imagine the 2018 cars and their prices, but a great solution to this is to lease one of these exotic cars instead of purchasing it. When leasing, at the end of your contract, you will have essentially paid the difference between the car’s price and the residual value (or what it is expected to be worth at the end of the lease), so leasing a car is a good way to help you enjoy the latest high-tech and safety features of new car models without being burdened with the price of depreciation. What are you waiting for? Lease one of these exotic cars in Canada today!

Which Vehicles are Cheapest to Repair?