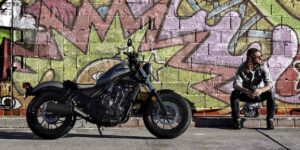 This is the 2017 Honda Rebel and the moment I’ve typed those words, I can’t help but feel a bit of nostalgia creeping in. Growing up in the 80s meant that there is a huge population of motorcyclists out there who learnt to ride on a Honda Rebel. It was an easy machine – easy to ride, easy to fix. It had a lot going for it and so this new one that’s coming our way in 2017 has me filled with hope. It still carries over the same core advantages of the Rebel brand name and yet, adds so much of a modern touch.

The 2017 Rebel is going to come in with two powertrain options – a 286cc, single-cylinder motor on the Rebel 300 and a 471cc parallel twin on the Rebel 500. Both engines are borrowed from Honda’s CBR series – the CBR300R and the CBR500R kind enough to let the Rebel share their motors. With a low seat height, light overall weight and some awesome styling, the new Honda Rebels will surely make for motorcycles that will get a whole new generation introduced to the pleasures of being on two wheels.

There’s more, because these 2017 Honda Rebels are begging to be customized. Their simple construction and versatile nature mean that adding just a few parts here and there is enough to transform what is essentially an entry-level cruiser for beginners into something that even more seasoned riders will enjoy. For starters, take a look at these three examples that Honda showed off right after the Rebel twins were unveiled. In a world where personalisation is big business, the Rebel’s open adaptability will be a sure-shot advantage.

So how much do they cost? Well, official pricing is still on its way, but the Rebels shouldn’t be too much off the price tags of their respective CBR counterparts. That puts the Rebel 300 at about $4,399 and the 500 at $5,999. Sounds like a good deal to us!

While the Honda Rebel is heading Stateside early next year, here’s an interesting piece on why it makes so much sense for emerging markets as well.

Write My Research Paper for Me?