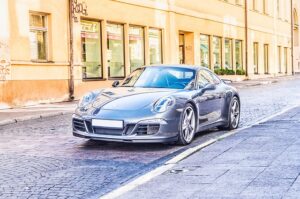 Are you into cars? We all are! Of course, there’s more to the roads than a set of axles, wheels and engines. Some cars can be a feast – just to look at. They’re great beasts, all sleek in design with amazing features and unique qualities that will keep your eyes open wide and have you saying “wow!” each time. In this article we’ll tell you about the 10 most expensive cars as of this year and the unique features that make them stand apart from all the other metal on the streets.

The Lamborghini Veneno Roadster was launched on Lamborghini’s 50th birthday. It initially came with a price tag of dollar 4.5 million, which will have appreciated since it’s 2013 launch. The word Veneno is Spanish for “poison”. Classic. This sports car is aerodynamic with a swept back body and a sharp cut fuselage – the kind that car spotters generally die for.

Trevita is a Swedish abbreviation that translates loosely into “three whites”. This is in the league of the fastest cars in the world, reaching a top speed of 254 miles per hour. It has a marvellous acceleration, and its carbon weave diamond fiber finish has earned it global fame. The car comes with a price tag of $4.8 million, thus putting it straight onto this list.

This, of course, is one of the best. The Alfa Romeo 6C 3000 M Colli Spider may cost you $2 million, but you need to take a look at the other aspects of this beast – it was produced in the early 1900s and is a vintage classic. If you want the old royal taste, there’s nothing like it. Take a look at some Alfa Romeo concept cars here – they’re all super good!

Italian design house Pininfarina designed this supercar, in the memory of the owner’s deceased son. Ferrari made only six of these cars, which were sold to select customers. Released in March 2013, this car costs a whopping $3 million.

Aston Martin has never made cheap cars. All of its products are unique in themselves – setting the standards in the manufacture of fancy road beasts. The Valkyrie has a fancy name, with a fancier price of $2.3 million. Only 150 Valkyries were ever built, and they all boasted a 6.5L aspirated V2 engine. It’s design was decided by Palmer and Red Bull over a drink, as they say and it’s stunning looks and features earned the car its worldwide fame.

The Sweptail was born British and it looks just so. It sports that old royal formal British look that we generally admire. A release price of $12.8 million makes this automobile a far cry from its contemporaries on this list. There was also only one model ever made of this type of car. What adds to this car’s uniqueness is the fact that it is completely built by hand and was commissioned at the special request of a super yacht and airplane specialist who had the idea in his mind.

If you’re even remotely interested in cars, or mostly, even if you’re not, you will have heard about the Bugatti Veyron at some point of time. With a price tag of $2.44 million, the Veyron’s 8.0 litre engine produces 1200 horsepower. The other great car Bugatti gave us was the Chiron, which is also a great machine, but a limited edition like the Veyron.

The Lykan Hypersport was a creation of the Middle East. Built by W Motors, a United Arab Emirates registered company, this masterpiece is a limited edition Lebanese sports car. Only seven were ever planned and it was unveiled for the first time at the Qatar Motor Show in 2013, grabbing eyeballs ever since. The price for this one was $3.4 million and it was intended to seat only a very elite audience.

The Vulcan’s body is completely carbon fiber and its scientific quality – as if out of a Delta Quadrant, is impressive. The car hosts a 7.0 litre V12 engine, capable of producing 800 horsepower. The Vulcan, with its predatory name, costs something over $2.3 million.

British firm Lanzante took a McLaren P1 and redesigned it to make the McLaren P1 LM. This brilliant car had only five of its type ever built and they all came with a price tag of $1.6 million. The car was a hit when it earned its fame on the racing track, breaking expected speeds, while continuing to be road legal.

That was our list of the best. These cars may look heavy on the pocket, unless of course you’ve got lots to spend. It is however, when one looks beyond their tags that they turn out to be amazing machines built to rule the roads and ride on your heart.

6 Ways To Save Money By Re-Using Old Towels