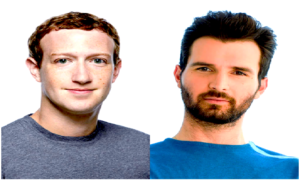 He’s in his early 30s, a highly successful entrepreneur with scrubbed-clean boyish looks and bags of enthusiasm – plus the ability to impact millions of people. We’re talking about Mark Zuckerberg, right, the target of so many news stories? Actually no – our focus is Hollywood producer Andrea Iervolino, a man who’s about to become A-list and potentially as well known as the Facebook owner.

Iervolino is on the verge of announcing a new venture with significant backing and potential reach that will jet-propel his name. The new Mark Zuckerberg? It sounds far-fetched, but this man has a habit of making the outlandish a reality.

Iervolino grew up in near-poverty in rural Lazio, Italy with a paralyzing stutter and an alcoholic father. A teacher recommended he should be transferred to a school for disabled children. But Iervolino’s mother refused, and he started making moneyinstead. At the age of six he was selling snacks in the playground at his school. Next he moved to mobile phones, then websites – and finally movies.

“My mentality was: buy things, sell things,” says Iervolino. He teamed up with legendary Italian producer Luciano Martino and made a movie with Al Pacino. Finally, like Zuckerberg he took the big step, heading to the West Coast.

Like Zuckerberg too, he had a good idea that would fly. In his case, it was movies that avoided the major distributors and studios with a TV-focused, digital approach. Iervolino took ownership of the film distribution company AMBI in 2013 and worked with Selena Gomez, James Franco, Sarah Jessica Parker, John Travolta and Antonio Banderas among others – on movies including To the Bone, The Music of Silence and The Merchant of Venice.

Next the acquisition of the Exclusive Media Group film library in 2015 brought Donnie Darko, Momento, Ides of March, Rush,Cruel Intentions and other cult hitson to the back catalogue. Iervolino now has nearly 500 produced or owned movies under his control.

But all the while, Iervolino has been cultivating his tech credentials. His first business made websites for local companies, and he’s been waiting for the right time to strike.

With Facebook and other networks under scrutiny for their treatment of user data, that moment has come. In his new venture, Iervolino will bring an understanding of how to entertain people – the messages, images and stories that resonate – to the smartphone screen.

Like Zuckerberg he’s has had a killer idea that’s worked. But his latest concept is even better, and will compete with the Facebook founder head on.

Why is China an attractive destination for foreign investors?

How Digital Marketing can Leverage Blockchain