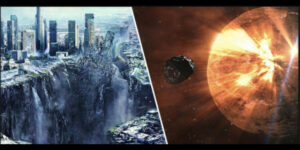 Like many of you I’m concerned about a variety of things that could end life on the planet. This is why, when I heard about the Lifeboat Foundation, I agreed to be on one of their advisory boards. I’m far from the most active though and had a chance to chat with the founder Eric Klien for an update and figured that it would provide a good overview of the organization.

Klien has been involved in a number of companies mostly revolving around analytics. These included Time Trend (stock market investment tool), Match.com (online dating), and the web hosting company Colossus.

The most interesting past project was the Atlantis Project and effort with Libertarian roots to create a new country out in the Caribbean Sea named Oceania. This city was to be independent of the limitations of present-day governments. Sadly, god, apparently, didn’t care for this concept (extreme weather events kept sinking the initial efforts). By the way, there is a new Atlantis Project that looks even more interesting given is surrounds the concept of a Space-scraper.

Lifeboat was founded shortly after the 9/11 attack and upon the realization that the world was approaching a time when a small group of people could create world ending event. The range of methods for a world ending event was increasing as well extending from nuclear power and bioweapons, to colliders, artificial intelligence, and Nano-machines. Of these Klien believes the greatest threat revolves around self-replicating threats, weapons that can have babies, like viruses and Nano-machines which can also mutate as they replicate to breach or overcome containment.

His biggest concern was that governments just don’t take the related potential threats seriously enough to mitigate them and began to realize that an organization laser focused on threats might be able to prevent related catastrophic and existential outcomes more successfully. In effect he was motivated to prevent preventable world ending events.

One other big concern was that government led by despots, think North Korea in particular, might create doomsday weapons that would attempt to assure, through assured destruction, assassination. This class of weapon could breach containment, could be triggered by any death of the despot, and, without knowing the nature of the weapon, developing a targeted defense isn’t viable. He used as an example how effective the Black Plague was at effectively ending the 1st World War given more were dying from the Plague than in the war itself putting substantial additional pressure on the combatants to end the war. The potential to create a plague like this has existed for decades and there are even government sponsored sites that explain how to create such a weapon. He felt that, rather than mitigating these massive threats, governments were instead inadvertently making them more likely.

Lifeboat Foundation was created to address these growing existential threats and they have a number of focused working groups targeted at each of the Foundation’s many threat categories. I’ll talk about a few of them below:

AI Shield: This anticipates a hostile AI and collects information on how to prevent and mitigate such a thing. Realize a hostile AI might not be one that was designed to hurt people, but could be an AI that was poorly programed and in the course of its programmed duties killed or hurt humans as part of the programmed process.

Bio Shield: This focuses on biological viruses, manufactured or naturally created, that could devastate the human race if they were put into the wild. Again, this service is focused on both prevention and mitigation of this potentially race ending technology.

Nano Shield: This is mostly focused on the coming wave of microscopic self-replicating machines. Like a virus these things most likely won’t have the intelligence to care about humans if they simply could harvest the materials that would allow them to replicate, they could wipe out life on the planet simply by converting all those materials to Nano Bots at scale.

Particle Accelerator Shield: This caught my eye after I read that the analysis of the risk that the Hadron Collider would create a world ending black hole was off the wrong way by at least two magnitudes. Still remote but we, as yet, aren’t able to leave this planet quickly if we blow it up.

Alien Shield: This anticipates that are calls out to space asking for space aliens to visit might end really badly. Mostly this just recommends we work really hard to make the visiting Aliens happy. This is because their idea of a bad Yelp Review might otherwise be a hole where the earth used to be. But this includes First Contact Protocol, languages, and other unique methods to establish communication.

(Another to check out is PersonalityPreserver or immortality. This is a relatively new site but it includes the use of Time Travel).

I’m a big believer in an existential threat mitigating service outside of the government. This is because governments seldom take things like this seriously until the related catastrophic disaster has occurred. The Nano Shield is probably the most interesting service because the government appears to be the least concerned about this category which could potentially consume the planet were these machines fully self-replicating. Fortunately, this potential is in our future but it’s nice to know there is an organization like Lifeboat already on the case.

Why Businesses Are Still Faxing in 2019