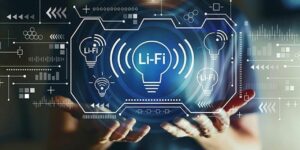 It can be reasonably ascertained that by 2020, WiFi would be connected to over 1.7 billion products which simply means that the year 2025, the wireless data traffic would grow in such multiples that the radio frequency spectrum that is occupied by WiFi will not be able to cope effectively with the demands that will be put on it. Researchers have been trying to make developments in technology so that WiFi can be replaced by some alternative forms, and in this respect, Li-fi seems to be one of the leading lights

Li-fi is a system of communication which is meant to use part of the visible light portion of the electromagnetic spectrum in order to transmit information at high speed.  However, the question still remains if it will be competent enough to replace WiFi. While the internet was considered as a luxury back in the day, it had now become a necessity. We can hardly imagine our lives without the internet, so, if there is any threat to WiFi, it has to properly replace.

WiFi has been using radio waves in order to transmit information from one place to another; however, Li-fi or light fidelity is a technology which will be using light waves in order to make the same transaction. The development of Li-fi began after it was noticed that this technology could transmit data at a speed that was about 100 times faster than traditional WiFi.

Li-fi works somewhat in a similar manner as that of a television. In the Li-fi version, much like on television, the input code is transformed into a binary code, which is then transmitted through infrared light waves by the sensor in the remote. The said light waves are then decided and can then perform the intended action. Much like WiFi and in addition to it, Li-fi technology can also be used in cars, planes and even during calamities. Like WiFi, it can be used in schools, hospitals, across lecture rooms, in our homes and offices.

Change is an essential concept in technology, but at the same time, change can also be seen as unwelcome and often as a challenge owing to the fact that people are afraid of these changes. Li-fi will look much like light bulbs. Rapid blinking of light that will not be able to be perceived by the human eye, this innovation is absolutely wireless and can exist with the help of the existing LED light bulbs, which means that there isn’t much investment that has to be made to make this technology turn into a reality. However, laptops and mobile phones have to be fitted with a photosensor which will be able to detect the incoming light.

While research is still being conducted in order to find the perfect phone photosensor, some companies are trying to use the existing front and rear camera to understand if these can be used as well.

One of the most significant disadvantages of using Li-fi is that it requires a line of sight link, which simply means that the device needs to see the incoming light source. This makes it impossible to be used in such places like in a smart city or in large institutions where some big building or objects could obscure the light source. Since it uses light energy, photons, which are the units of light energy has to be both detected as well as emitted by the source for the transmission to be successful.

This means that any obstruction to the light will fail the communication. Li-fi can also not be used if there is bright sunlight, which makes it unreliable to be used outdoors. It will not be able to work under sunlight or if there is any sort of harsh lighting as the photodetectors will not be able to detect the modulating light waves. This means that the successful usage of Li-fi will require subsequent investment in lighting and wiring.

One Way Link Only

Unlike the IP link that is created by WiFi, the physical limitations of Li-fi make it a one-way dump of information rather than two-way communication. This means that through the use of Li-fi data, can only travel unidirectionally rather that bidirectionally, which is the main focus of communication. Li-fi is generally seen as a one way only content delivery mechanism, whereas successful communication has to be both ways.

To this end, researchers are of the opinion, that a hybrid Wi-Li-Fi system can be used to solve this problem and make communication possible using Li-fi. In this way, WiFi will have to be used as an upstream from a device which will radically solve this problem. However, much research is still pending as to whether this technology can be interlayered with traditional WiFi to make it functional.

The Cost of Li-fi

Since most of the mathematical techniques and tactics that are used in Li-fi are somewhat similar to those used in WiFi, the cost of this mechanism can somehow be guessed, but at the same time, it ultimately depends on the volume of sales. When the first WiFi was launched, it was also considered as extremely expensive, and even till date, the upgraded versions of WiFi are still pretty costly than the basic models. In order to keep the cost of Li-fi affordable to the public, a more fundamental and slower version of the technology will first be made open to the public than the version that had been tested in the laboratories. There is also the additional cost of photo sensors that have to fit into your device. All in all, the initial price of Li-fi may be somewhat high.

If the speed and usage of WiFi truly become staggering, the general public will have no other option rather than relying on Li-fi. Researchers still have a few years to develop on the technology and make it usable by that time. We might have to depend on the hybrid Wi-Li-Fi version in the future, after all.

How Your Business Can Minimize the Threats of a Chaotic Internet

The most trending startups for 2019