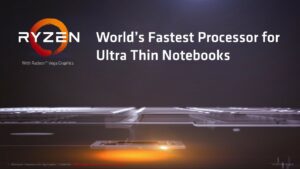 AMD has really been kicking butt of late on the desktop. I was particularly excited about their Threadripper products both because the name was wicked cool and because that processor finally allowed me to crank my favorite game “Ashes of the Singularity” up to 11. But AMD has been off quality laptops for some time and this announcement heralds its return.

Let’s talk about what this emerging new platform could do for the market.

AMD just announced their financials which clearly don’t yet include their mobile parts. They got a huge pop from PCs while Intel dropped to flat. By the way I’d really like to know how the numbers houses can continue to report that the PC market is in decline if both primary desktop processor vendors are either reporting flat or significantly improved revenues. Normally when a company beats the street they do so by small percentages AMD beat by a whopping $130M on a $1.64B base, that’s an impressive beat.

But the cause seems to be primarily due to the fact the market got really excited about their new Ryzen processor and Vega graphics. But recognize that a massive chunk of the market doesn’t buy desktop computers where AMD is selling today but they buy laptop computers where Ryzen will be selling shortly.

This is the promise of AMD’s new Ryzen/Vega based laptops. Because Intel don’t have a high-end graphics solution themselves laptops based on their technology seem generally best with Intel integrated graphics but then you give up a ton on graphics performance. If you get an Intel laptop with a third part graphics card, you generally take a huge it on battery life or laptops size.

Because AMD makes both parts they can better tune the use of the processor and graphics card to the software, particularly the game, being run and you have an increased chance of getting a laptop that is thinner, lighter and yet more powerful with better battery life than you’ve ever had before.

AMD tends to price under Intel which also suggests you could get this thing cheaper than a similar Intel blended product. Granted we’ll get a better sense when something ships, but on spec, the coming AMD based laptops look good.

Will The OEMs Build An AMD Halo Laptop

Unlike prior mobile parts from AMD which were well priced but often significantly were significantly off the Intel performance numbers these are very competitive. You could build an impressive mobile notebook rig with this, but the OEMs are more used to using AMD parts to build value boxes and Intel pushes these vendors hard to continue down this path.

So, the question I’m waiting to see answered is whether one or more vendors take this very powerful and powerfully unique AMD product set and builds a Halo product. A Halo product, if you haven’t seen the term before is, a short run (low volume), showcase offering you use to demonstrate your design skills. It is designed to pull people to your brand even if they don’t buy the offering. The Jaguar Project 7 is a halo product for instance, few buy it, but it sure pulls people into showrooms. The old Acer Ferrari laptop was a halo product (and one of my favorite laptops of all time and it was also based on an AMD processor).

In a few weeks we’ll know if any AMD customer (I’m kind of betting on HP) comes up with a product like that old Acer Ferrari Notebook that puts lust in my heart.

Wrapping Up: AMD Is Back

With this announcement, and particularly with their financial performance AMD is showcasing they are back with a vengeance and taking no prisoners. However, to truly get there the OEMs must back AMD’s prowess up with powerful products. I’m hoping for at least one truly spectacular Halo products, we’ll see if any one of the OEMs steps up.

Breast augmentation: how will the industry change in 2018?