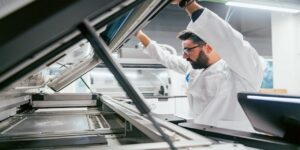 HP is arguably the largest and most focused company attempting to redefine manufacturing with 3D printing.  Their path should eventually take them to the creation of factories that work like large 3D printers where raw materials go in one end, and sophisticated finished goods come out the other.  HP has also put itself and the forefront of large scale sustainability and arguably leads the technology industry in areas like ocean-bound plastic reuse, recycling, and energy conservation.

These two seemingly unrelated efforts came together this month when they announced an expanded alliance with BASF, Extol, GKN Powder/Metallurgy/Forecast 3D, Henkel, Oechsler, and Prototal to advance their 3D printing efforts.

Let’s look at what they announced and what it means this week.

Polypropylene is commonly used as a very robust manufacturing grade plastic.  It is versatile, durable, and chemically resistant so that it can be used in a variety of products, and it performs particularly well for automotive types of products.  The potential uses for this material would include industrial machinery, robotics, farm equipment, medical equipment, and, potentially, even aircraft.

The medical use is most timely because it is potentially ideal for some of the medical, reusable, personal protective gear that remains in short supply during the Pandemic that is keeping many of us bottled up at the moment.

Also, this material will allow HP to implement a process that will enable the recovery of 100% of the unused material left over after a 3D printed parts run, saving money and reducing waste significantly for the HP 3D printers that use it.

This announcement means HP will be able to provide solutions for a broader number of industries and do so with a far higher level of conservation than they had been able to accomplish to date.  So both more capability and less waste consistent with HP’s aggressive conservation efforts.

HP also announced an increase in professional services.  3D printing remains little known in manufacturing, and to get it to spread to its potential manufacturers need a great deal of help in adequately implementing it.  HP’s new service offerings include design optimization for breakthrough applications, manufacturing process streamlining to make the best use of 3D printing technology and advances, application identification and discovery services, and help to scale customization and production.

Oechsler AG is one of the leading global engineering solution providers for the additive industry in the world.  HP’s announced strategic alliance with the firm will help drive HP’s 3D printer technology and processes into the auto market, where Oechsler has a significant presence.   Using an existing player to open up a new market is a best practice, and Oechsler also works with global consumer electronics companies, home and commercial appliance companies, and some of the most innovative medical device makers in the world.

The result should be far greater penetration of HP’s 3D printers in each of the markets where Oechsler AG is a significant player.

One interesting and somewhat, buried, announcement was with Cobra Golf and Parmatech to 3D print metal golf equipment. HP’s relatively new Metal Jet printing technology needs a market to prove itself in, and golf equipment may be the perfect market for this technology to initially be seen.  Many executives play golf to engage with their clients and co-workers, and by introducing 3D printed golf equipment, the effort should be highly visible to other potential clients for HP and help further spread the rollout of metal 3D printers.

This move should provide HP and its partners with a way to showcase this new metal 3D printing capability to a large number of people that are potential customers for it through golf, and this effort should significantly increase HP’s ability to expand metal 3D printing.

Fast Radius is one of the leading companies in manufacturing technology.  A company like them as a partner would be critical to positioning and helping with roadmaps for HP’s 3D printing market expansion efforts.   As a new member of HP’s Digital Manufacturing Network, the firm gains access to HP’s customers.  These customers often want 3D parts but also want someone else with more experience to build them so Fast Radius potentially gets new customers, and HP gains a partner that can significantly help to define market-driven product roadmaps and services.

HP is aggressively moving their 3D printing efforts, metals and plastics, into the mainstream of manufacturing in areas like medical equipment, industrial equipment, automobiles, consumer goods, and appliances.  The partnerships they announced this week expand their capabilities, decrease their waste, and assure deeper penetration into their target markets.

HP intends to be the world leader in additive manufacturing using 3D printers and eventually in 3D manufacturing.   This week took them a significant distance towards that eventual, very lucrative, and potentially far greener result.

Choosing a Lead Generation Provider for Your Business