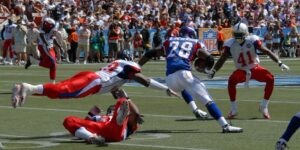 Changing era accompanied by the onset of digitization has changed the world in many ways. Every industry in the world be it manufacturing, marketing and or sports have been affected by it equally. While there has been a lot written about how digitization is changing businesses, today here we talk about how it has changed one of the most followed sports in U.S.A, the NFL.

Below we mention top 5 changes which one of the most popular leagues of the world has seen in recent years.

One of the major inclusion in almost every field sport is the addition of artificial turf. Artificial turfs have made their way into NFL as well given the natural grass used to turn into a brown mess should there be heavy rain or snowfall. However, in the beginning, these artificial turfs were hard to play on and often resulted in scratches and injuries to players. Further working on it now turf manufacturers have replaced these artificial turfs with astro-turf versions, the one which is comparatively soft, as well as more, cushioned preventing any further injuries.

With technology now being introduced, the traditional scoreboards have also seen a makeover. There are now big television screens instead of conventional boards, not only displaying scores but providing a complete look at the action happening live in the ground. These screens are not only helping the audiences to get a better look at the game but is also helping players to see the pursuers behind without actually having to turn their heads. This is now allowing players as well as referees to get better insights in the game thereby decision making, as well as foul calling, has become easier.

One of the most drastic changes in NFL has been a change of player’s helmet. While the initial helmets had soft leather, they were later modified to include a padded layer, followed by the inclusion of face mask in the 60’s. The last change which was made to the helmet was the polycarbonate material which was in manufacturing this equipment. Now with the onset of technology, these helmets are being turned into smarter variants. For example, Riddell and Schutz, helmet manufacturers have come up with a design in which helmet itself will be able to record the level of impact on head or injuries sustained, allowing doctors to quickly diagnose any serious injuries if occurred. If you wish to shop for some advanced NFL safety gears, then shocpro.com is a website you can try.

Seeing NFL players in their old uniforms you will see nothing more than big fat dudes dressed in oversized T-shirts and shorts. However, with technology advancing these uniforms have shrunk and become more pleasing. Now the fabric instead of being simple loose cotton is modified stretchable fabric which not only dresses the player but also protects him from certain injuries. Companies such as NIKE are working on even smarter uniforms one which has features such as thermal cooling within it.

One of the best changes which we can think technology has brought to NFL is the change in recovery techniques. Previously injuries such as torn ACL was a sign of player’s career coming to an end, given these injuries required joints to be opened and operated on. After such sessions players were unable to recover on time and hence the career was practically over for them. However now with arthroscopic surgery, such issues can be resolved and a player can fully recover in a time span of a month. These procedures can be performed without opening joints instead can be done through small incision point, which takes a month at most to heal.

These 5 changes are just tip of the iceberg and technology is providing many more new outcomes for NFL to include. What else will you want to be changed in NFL, do let us know in the comment section below.

5 Reasons to Attend a Self-Help Seminar

8 Compelling Reasons Why You Still Need a Laptop