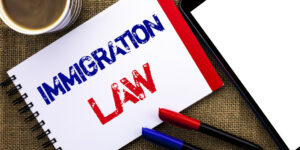 The technology industry is at the forefront of the U.S. immigration issues, but it’s not what you think. Yes, these companies often hire the best talent from around the world to grow their business, but they’re facing immigration in an entirely new way that doesn’t include visas.

“American companies and businesses rely on workers to succeed but in some industries, it may be more difficult to find employees who are trained for the job or who are willing to take on the company’s type of work,” explains Law Offices of Cheng, Cho, & Yee.

Amazon, for example, is working with facial recognition that the company has been developing for years.

And rumor has it that the facial recognition software is being sold to government agencies and police departments. Amazon workers are fighting back with workers writing to CEO Jeff Bezos in an attempt to curtail sales.

Workers are requesting that the sale of the technology be halted.

Technology played a major role in the 1940s when IBM was hired to help Hitler – yes, Hitler. Amazon workers are fighting back, citing examples of their technology being used under Donald Trump’s “zero tolerance” policies which have resulted in parents and children being separated at the border.

Amazon’s facial recognition platform, known as Amazon Rekognition, is said to have a lot of “real world” applications. Representatives for the company claim that the world would be much worse off without facial recognition.

Workers have demanded for the company to stop selling the technology to ICE, and demand:

Amazon claims that Rekognition works by providing two API sets to developers. The platform will allow for the analysis of image and video in the platform. The platform can be used to track a person through a store, parking lot or when crossing the border.

Deep learning analysis is also provided with the company’s RecognizeCelebrities platform being so powerful that it can detect 100 celebrities in one image. Rekognition is a powerful platform, in which law enforcement and government agencies can build up database and profiles on immigrants entering the country.

Microsoft has taken a strong stance against the Trump Administration’s policy of separating families.

ICE utilizes Microsoft’s Azure cloud software which caused backlash against Microsoft. The company’s backlash was followed with a statement from CEO Satya Nadella that claims that the company is not working on “any projects” related to separating families at the border.

Microsoft’s relationship with the government isn’t new, but the company has, in the past, explained some of how ICE is using Microsoft technology. The company’s blog post claims that ICE can use their Azure platform to:

Azure Government, a program that Microsoft is proud of, was built specifically for the U.S. Air Force and ICE.

Microsoft workers have also protested the company’s workings with the Immigration and Customs Enforcement. It’s reported that an open letter was posted to the internal message board at Microsoft with over 100 employees protesting the company working alongside ICE.

Microsoft has a $19.4 million contract with ICE that offers artificial intelligence and data processing capabilities.

Workers that help develop the technology took a stand, claiming that they no longer remain “complicit” and are part of a growing movement that is occurring across the industry.

Facial recognition software is used across the world with many startups aiming to work with government agencies to bolster their tracking capabilities. Businesses can also use facial recognition services to recognize customers, offer a highly tailored experience and also provide state-of-the-art relationship management.

Security agencies are integrating facial recognition into their platforms to allow for real-time recognition of potential threats.

Gaming agencies are using facial recognition to import a player’s look directly into video games to provide an enhanced, immersive experience for players.

What Are the Penalties for Noncompliance with GDPR?