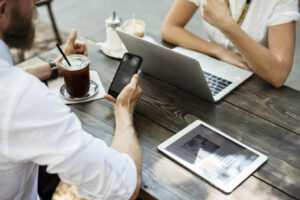 We live in a world where it seems to matter more to share a picture of us drinking tea at a cosy Parisian café than enjoying the experience itself. No one can deny the addictive power of technology these days, as we are expectant to see the release of the newest Apple’s iPhone model, or when will mobile phones change to self-charging batteries to extend our “connection” time with the internet. But how does technology truly affect your lifestyle?

For the smartphone brand you choose to your gaming platform and preferred hobbies, technology is shaping the path to tomorrow’s adventures without us being aware of such fact. There are, however, multiple elements that can give us a way towards the answer to this question.

iOS vs Android: The Eternal Debate

How many times per day do we come across this very comparison? As a customer myself I tested both platforms, though I won’t condition this article to my personal preferences, trust me when I say there are many.

Starting from the whole black market approach that Android users can find through much easier methods than iOS ones, to wearable devices that heighten the preferred OS choice as could be the Apple Watch and the multiple Android-Compatible smartwatches (being the Samsung Galaxy Gear the preferred one), there is also an interesting variable on how using iPhone or Android smartphones defines your character.

Whereas Android users can state the countless benefits of working with an open-source interface, much in the Linux fashion, iOS users can brag about the stylish layout of their devices, or the fact that software is stunning regarding user-friendless, plus not need to install it all over due nasty bugs.

In the end, it’s all a matter of personal preference, but take for granted that this first simple decision to make also shapes much of the conversations we hold among our peers, not to mention the image we project to other people if using one brand of a smartphone than others.

When Talking About Videogames

In the Play Station vs Xbox question, Nintendo seems to be playing way far from these league, still offering games that do not prove to be as excruciate detailed as realistic Play Station/Xbox ones, but rather focusing on cult gamers of certain sagas, or providing family-geared games.

Does the gaming platform you own defines your personality? Most certainly. For some, being a Play Station user almost equals to say you love games like Final Fantasy or take gaming at a serious level. For others, Xbox is by definition the gaming platform to use if interested in Car Racing games due to interesting titles as Forza Motorsport (which isn’t available for Play Station). Being a Nintendo fan can certainly label you as an anime/manga lover, due to the prestigious titles geared towards such topics among handheld Nintendo games, but also that you take gaming as something you enjoy occasionally and not a serious sport.

How About Traditional Hobbies?

There is another fascinating side of this technology development quest, and that’s directly linked to how we experience our lifelong hobbies these days.

Imagine that you used to read about 1-2 books a week, perhaps more. What was the overall expense to make? Today, thanks to tablets and devices like Amazon’s Kindle we can enjoy thousands of books, from all-life classics of literature to the newest best seller available at the bookshops, just for a fraction of the price and in a much portable package. Long gone are the days in which you needed a spare room to keep all your books in place – something that certainly some miss but others do thank due to lack of extra space.

In what regards to drawing and painting, digital mediums opened the gates to a broader range of techniques thanks to digitalising tables as Wacom ones, but also as we can get in touch with the works of others, thus gaining inspiration and new skills at the same time.

Is There Any Potential Downside?

Though everybody uses and love, in most cases, technology, not everything can be labelled as a dreamland as inconveniences may arise.

There is a growing tendency in stress-linked illnesses among young adults due to sleep deprivation, depression and poor time management. While technology opens the gates to a fascinating world where there seem to be no physical barriers to the knowledge we thrive to acquire, being in constant touch with others does not prove to be the wisest solution in some scenarios (i.e.: a breakup – by digitally stalking your ex to check if he/she is thinking about you, having someone new in their life, etc.).

Also, many people have faced issues at their work linked to their use of social media networks, mainly due to comments made on sensitive topics like politics, religion, sexuality; but also due to the lack of a proper division between personal and work-related stuff in your email accounts, or potential data leaks due to lack of VPN services.

Should we be concerned about all these elements stated above? Certainly. Like a popular, yet fake, quote attributed to Einstein goes: “I fear the day that technology will surpass our human interaction. The world will have a generation of idiots.”

Reality does not need to be so crude, though the amount of time we lose by engaging in social media is worryingly increasing each day. Instead, consider how does technology is affecting your current lifestyle and what in fact you love to do with your spare time. Just taking 1-2 hours off online procrastination would do wonders to your life in the short term.

What is medical malpractice and what can you do about it?