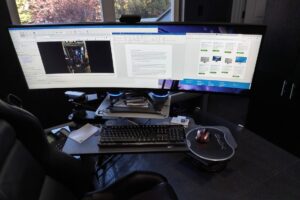 Last week Dell announced a refresh of their monitor line with one exception, that was the 49” U4919DW beast they announced this week. I’ve been using this QHD monitor for the last several days and it is impressive, and it replaced the 43” Dell monitor I had been using. Target market for this monitor is largely the financial segment which will, I expect, be very excited about this thing. In that market many will end up with two of these stacked which would be equivalent to 4 27” panels but without the vertical line in the center of your view that would result if you created a grid of 4 27” monitors. It does make me wonder how long it will be until Dell brings out a monitor that is twice as high eliminating the horizontal line that currently would separate two of these panels in use.

As noted above this is the market the monitor was focused on. Traders today can have a huge number of monitors on their trading desk often connected to several different data sources not just one PC. They use these monitors to monitor a huge number of stocks, bonds, news reports, economic metrics, and even the weather at times all to get a little bit of an edge in predicting which way the stocks they follow are likely to move.

This monitor replaces two 27” panels for them and the rigs showcased at the preview not only had two of these monitors but often several other smaller monitors bracketing them, so they could see as much information as possible. This monitor can take feeds from two PCs and you can switch control between the two PCs using a keyboard hot key. This allows you to use one keyboard and mouse (connected to the USB hub in the monitor) for both machines. It is impressive and there is no wonder the financial traders (who got their own private preview of this monitor) are excited about it.

Those doing research, like me, also often use multiple monitors. We don’t need the heavy rig a trader does but being able to pull up reference material on one monitor while using the other to write on provides a huge productivity boost. With one screen (particularly on a laptop) I’m having to constantly open and close reference windows but, on this thing, I can have up to 4 pages open at once at full size and easily look between them. This allows me to keep my writing speed up to its theoretical maximum and keep cranking. It comes close to doubling my writing production speed and I really feel the pain when I travel and have to shift back to a small laptop screen for the same purpose.

While this monitor isn’t really for games I’ve found it works very well on my favorite strategy game “Ashes of the Singularity” giving me a decent battlefield view. Another class of games this should work well for is driving games where you are using a simulator. The screen in that mode feels more like a windshield giving you a far more realistic experience. Given simulators can cost thousands of dollars (the one I have my eye on costs around $50K) This screen with a driving simulator would be amazing. I imagine it would be equally good with flying simulators as well.

Be aware you need a lot of graphics power to push this thing, if you are using an Intel integrated graphics part you’ll likely need to upgrade to an AMD or NVIDIA graphics card, mid-range or better, to drive this monitor.

Wrapping Up: Looking To The Future

Large monitors like this one can be huge productivity boosters particularly in the markets, like Finance, where they are targeted. They can also help anyone who needs to look at reference material while they write. This is an amazing monitor but while I can picture it doubling is size vertically, I think then we’ll likely hit the size limit of what can reasonably be put on a desk at that time. Long term the future is likely be defined by head mounted displays at 4K+ resolutions so the size can be virtualized and then the monitor can become as big as your imagination and the resolution of the head mounted display allows.

I can hardly wait for that future, until then however, I’ll be living on this 49” beast and loving every moment of it.

Software Business and the Internet of Things: The Market’s Signals

Tips for Buying your First Car