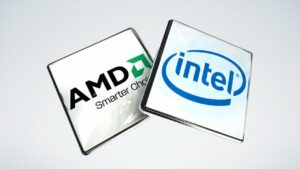 Intel has always seemed to have a multi-tier support structure for OEMs, Apple is at the top of the list with their own unique support structure and dedicated help, then you have the major Windows PC OEMs which likely include Microsoft Surface now, and finally you have everyone else. When there is a shortage, as there is now, typically the lowest tier gets hit the hardest, the major OEMs suffer less, and Apple doesn’t have to worry much. This is particularly concerning now because it is believed that this latest shortage is due to Intel shifting manufacturing capacity to modems for the iPhone leaving too little for anyone else. Dion Weisler, HP’s CEO, (HP has arguably been leading the PC market recovery), posted on Twitter that HP is good both because they aren’t in the lowest tier and because AMD stepped up to cover the shortfall.

The question is that, given AMD is very competitive again, how long will it take these firms to realize that Intel’s focus has shifted and that, perhaps, they should have AMD as their primary provider given Intel is mostly supporting Apple now. Apparently that is happening at scale because AMD’s market share and stock price continues to advance significantly. Effectively Intel is giving AMD the PC market as they flip to competing with Qualcomm and modems, which, given Qualcomm’s allegations of IP theft, doesn’t appear to be going that well.

Intel’s shift to Apple is fascinating because Andy Grove, their most beloved CEO ended up hating the company, Apple is signally a shift to ARM for their PC business, and the firm has a history of backstabbing suppliers.

This is all providing an unprecedented opportunity for AMD as the firm that can step in when Intel stumbles. The bigger and longer lasting issue is that currently Intel is out of line with many of the analysts who have pointed to the Apple modems as the cause for the shortage and Intel’s public position that the cause is something else. But Intel has a bit of a credibility problem given they also indicated they had plenty of CEO candidates but now seem unable to find one, and delayed warning US OEMs (and the US Government) of a number of serious security problems until months after they notified Chinese companies and Intel’s then CEO divested every Intel share he could sell while still remaining CEO. Granted he was fired anyway but this all creates a huge credibility problem for a firm that every OEM and Microsoft are tied by the hip to. Even Google’s ramping Chromebook efforts are likely adversely impacted by the latest shortage.

AMD has always worked to be closer to the OEMs and has a history of listening to them when Intel has not. However, a series of execution problems early last decade damaged the trust these OEMs had for the company and both Rory Read (ex-CEO now at Dell) and Lisa Su (current CEO) worked to both fix the problems and overcome these old perceptions. Now AMD goes to extreme efforts not to overpromise, to ramp manufacturing so their customers aren’t caught short, and they have never (to my knowledge) favored one OEM over the others as Intel appears to consistently do with Apple. (I’m actually kind of surprised that the PC OEMs haven’t been more upset about this unique Intel/Apple relationship publicly).

I know a lot of my more technical friends have shifted from Intel to AMD for their desktop computers largely due to Threadripper and a number of them have lost faith in Intel and are avoiding that brand at the moment (mostly due to the combination of security exposures and patches that significantly damage performance).

Wrapping Up: It Is AMD’s Year

We like to trust the vendors we deal with but that trust can be damaged if those vendors take advantage of us. Intel appears to be doing that sequentially first with the security problems and apparent effort to both cover them up and individually profit from them, and their apparent shift to Apple creating a drag on production for their OEM partners. The security issues are giving users pause as well and, with Jaguar, the only firm that is known to use Intel’s automotive solution, getting pounded for performance problems related to that solution the sense you don’t want Intel Inside anything you depend on is clearly increasing.

If it wasn’t for the fact that switching vendors isn’t trivial, AMD’s sales would likely be going through the roof, even so, their growth and financial success is nearly unprecedented. If this keeps up there is a good chance AMD will be the primary for PCs and Servers and Intel will become the backup supplier much as they have tried to do with Qualcomm. Given this is Halloween season I’m beginning to wonder if the ghost of Andy Grove is going to come back and slap a few Intel executives around. Now that would be a YouTube moment.

The pros and cons of choosing a career in real estate