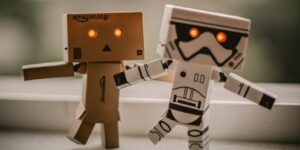 Before getting into this subject, don’t forget to check out the new web series about generation robots that shows companies which developed robots, that are designed to work and communicate with humans.

Movies represent a big part of our lives, and many people have seen many movies, the science fiction kind, with robots that come to Earth with the mission to take our jobs, or even worse – kill us. Some movies even represented them having sex with humans, but let’s be real – real-life robots are not to be feared at all. They’re actually kind of cute.

About the web series

A former cast member of the science fiction reality shows MythBusters, called Grant Imahara, who is also a robot expert, has a new web series which is called Generation Robot, which helps us in getting to know robots better and understanding how humans can actually deal with the concept of working with robots.

The series is sponsored by Mouser Electronics and, as far as we know, it consists in five parts which show certain companies and even universities that are focusing mainly on making robots feel at home into the real world, among humans and their workplace and typically everything that means the human world.

The first episode, which was posted on the 18th of April 2018, shows Imahara visiting the Institute for Robotics and Intelligent Machines from Georgia Tech University, which is placed in Atlanta. Actually, Georgia tech is the very first university to give a Ph.D. program in the field of robotics.

In this episode, Imahara speaks with the IRIM executive director and robotocist called Magnus B. Egersted. Their discussion hits points of interest, such as robots interacting with humans in the future. In the video, he talks about how all the robots used to be about mechanical engineering in the past, and now (or even in the future), the robots are seen as devices that include some psychology features, since they’re going to work together among humans. This means that modern roboticists are not only going to understand computing and engineering but humans, as well, for things to run smoothly and with no problems.

But wait, you have not seen the best part of the first video which was posted: you will not only get to hear the opinions of experts, which are working at the IRIM, but you’re also going to see a PR2 robot who is trying to feed the nervous Imahara with yogurt, with the help of a spoon.

The whole point of the Generation Robot web series is to show people interviews of roboticists who work in the US, China, South Korea, Japan, and Germany. This way, we’ll get a global opinion about the future of the robots among humans.

How to Stay Anonymous Online in 2018

4 Ways Your Smartphone Can Change Your Life for the Better