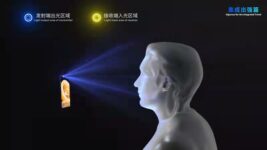 The basic principle of under-display 3D face recognition technology is that two transparent display areas with high pixel density and high infrared light transmission rate are set at the upper part of the phone. When the 3D face recognition is enabled, the two areas can capture basic data on core facial features with the help of under-display camera technology. Then by comparing them with the facial data saved in the system, the results of the Match Recognition can be obtained.

The screen must take into account both the display clarity and the transmission rate in photo shooting, which was once the biggest problem of the under-display camera. With the efforts of Visionox, the stability and maturity of under-display camera technology have laid the foundation for the system integration of 3D face recognition.

These achievements are the result of 16 years of hard work of the R&D staff. Visionox’s under-display camera research team has put years of effort into the realization of one goal. As early as 2006, they had applied for a patent on transparent screen; in 2020, they brought forward the world’s first mass-producible under-display camera solution; in 2021, the technology was iterated and upgraded; and in 2022, it will be iterated again.

As a company engaged in under-display camera innovation and development earlier than its peers, Visionox has built a comprehensive patent system with technologies and inventions covering the most extensive layout of core fundamental patents. For example, the invention of the Four Firsts (“the first small anode solution”, “the first drive circuit edge placement”, “the first one-drive multi-pixel/multi-drive multi-pixel array design”, and “the first serpentine electrode routing solution”), covering multiple patent groups for arrays, devices, drives, and materials, which has enabled Visionox to build its core and key technological barriers. Having the most and earliest authorizations and more than one thousand patents, Visionox has a dominating position when it comes to patents.

This has ensured Visionox’s leading position in the field of under-display camera. With two iterations, Visionox’s first-mover advantage has further expanded, while the technical advantages will also drive its market expansion.

According to Visionox, it will further enhance transparency, control diffraction, and optimize cameras and algorithms to achieve a better selfie effect. It will integrate more under-display sensing technologies such as under-display 3D face recognition, under-display ambient light sensing, etc. Moreover, it plans to further reduce the mass production cost of under-display cameras and increase the production capacity to benefit more consumers.