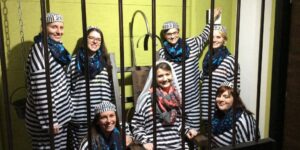 Escape rooms have established themselves as a popular means of entertainment for people who seek adventure as well as intellectual challenges. These games occur in closed locations where a group of players is locked for a fixed period of time. During that time, the players have to solve various puzzles presented in many interesting ways and as a result, have to escape from the room. Many of these games have become advanced in a way that the storylines they present seem very realistic. This is achieved through high quality sound effects as well as well-executed design. In 2017, the number of escape rooms around the world was estimated to be 8,000 and the number has only increased since then. Some locations have managed to become famous for the experience they offer to the fans.

This is another location where the fans might be able to find a large array of Manchester escape rooms to choose from. The games organized throughout the city have many different themes so that people of all tastes should find it easy to come across the right one. As an example, Breakout offers an escape room that draws inspiration from the wild west. “Once you are in true character (cowboy boots and sheriff boots optional) be prepared for a jam packed hour solving puzzles to escape the room although make sure you escape with enough time left to go delving back in to find bonus puzzles to complete! You are bounty hunters collecting loot – try not to leave any behind if you can! Be warned, if you don’t escape you’ll quickly become Breakout Manchester’s Most Wanted and be locked up for the rest of the night!” – say the organizers.

Los Angeles is one of the best destinations for people who want to experience the best escape rooms. There are many options in the city but some manage to distinguish themselves. The Basement is one of the most lauded escape rooms around the world. It features a horror story as the players are kidnapped by a cannibalistic serial killer. “In THE BASEMENT, you and your team will have to employ keen communication skills, a finely tuned organizational prowess, and a general ability to keep your $h!t together under pressure if you want to survive. This is what we like to call a “funnel puzzle” where you will find numerous items and clues throughout the room. These items all come together to orchestrate your escape,” – advertise the room operators.

London features a high number of escape rooms so those visiting the city shouldn’t have any trouble finding the option that suits them the most. In London clueQuest offers some of the most innovative escape rooms that many players might find appealing. If you enjoy movies about secret agents than PLAN52 escape room might be the right fit for you. “PLAN52 is one of our top secret locations and a fortress for highly classified archives and data. However, something terrible has happened: four of our agents who were stationed there have vanished without a trace. We now have proof that this was the work of Professor BlackSheep who had help from a clueQuest insider,” – says the company’s website.

Buying a Home? Are You Really Ready?