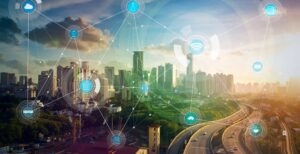 The environment continues to be a top priority among millennials, which means that energy efficiency is becoming increasingly valuable. In fact, a recent study by Deloitte concluded that “affordable energy” and “utilizing clean energy sources” are the two top priorities for residential homeowners. Many companies are attempting to capitalize on this trend, by producing energy efficient products or offering eco-friendly services. But the demand for sustainable energy is moving beyond individual consumer choices to become a collective goal, and potential now exists for the creation of entire smart cities.

The concept of the smart city may provide a solution to the sustainability problems created by rapid urbanization. In recent years, the number of people moving from rural areas to urban ones has placed significant demands on energy production in such places. As a result, energy prices in those areas have risen, air quality has deteriorated, and general quality of life has been lowered. However, improved energy efficiency and utilization in urban regions has the ability to increase energy security, save money for residents, and make cities more livable. Here are a few key lessons to learn about smart cities:

Nordic countries like Sweden have managed to reduce their carbon emissions, even while their economies continue to grow. The average Swede releases just over one quarter of the carbon dioxide released by an average American each year—most likely because Sweden has largely eschewed fossil fuels in favour of nuclear and hydroelectric power. These alternative energy sources provide power for most buildings in Scandinavian countries, including residential and commercial ones. Residential and commercial energy usage accounts for approximately 40% of all energy used in the United States, but much of this energy comes from oil. As such, it is critical that energy-saving smart home technology continues to be developed, and that it is made readily available to consumers in countries that have not yet embraced alternate energy sources.

Current smart-home technology is already revolutionizing the way many people live, by optimizing many common tasks. Smart thermostats prevent unnecessary energy usage for climate control, while smart lighting can make sure residents never leave the lights on by accident again. There are even smartphone apps that allow users to perform quick energy audits of their own homes, so that they can see exactly where there’s room for improvement and take the necessary measures to reduce their power consumption.

Between 2000 and 2016, the industrial sector managed to slash its energy use per unit of economic output by nearly 20%. This was accomplished largely through the expansion of production capacity for many companies as they scaled upward to meet growing demand from their consumers. The takeaway here is that building new production facilities improve energy efficiency because new facilities and equipment are likely to use energy efficient technologies.

Residential, commercial and industrial technology is naturally evolving to become more energy efficient due to growing demand from consumers. However, there is also a concentrated effort by certain governments to implement eco-friendly policies and improve energy efficiency in all cities. Canada, China, Japan, and the United States have all been at the forefront of establishing new fuel efficiency standards for motor vehicles. However, many vehicles outside of North America and Asia are not subjected to rigorous standards, leaving much room for improvement.

The good news is that worldwide investment in energy efficiency is growing. As of 2016, energy efficiency represented a $231 billion per year market. With luck, the trend towards energy efficiency will gather steam in the coming years, and aid in the creation of many more smart cities. Until then, individual consumer choices and support for sustainable policies will help to make current urban environments more environmentally friendly and livable for inhabitants.

Benefitting From a Volatile Stock Market