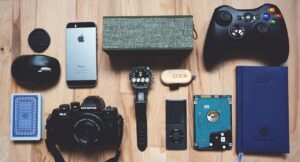 With the onset of the twenty-first century came an onslaught of new tech, with most of us owning, and wanting to own, more devices than any of us ever thought we would need. But just a few years later, the smartphone was invented, and tablet devices not long after. Both have improved drastically since their first appearance, with tons of cool apps that make everyday life a lot easier. A major question is – are they joining or replacing existing tech?

The Kindle is probably the most popular e-reader on the market, but along with several different models, Amazon also offers an Android app for Kindle, so which is more popular? The app may be more convenient in some ways, but the device offers a lot of features that aren’t available on the app, not to mention that it will always trump your average smartphone size wise, making reading easier.

Though adding storage space to your smartphone or tablet with an SD card is easy enough, the Kindle device already has plenty. The fact that it uses e-ink also means you can leave it by your bed for a few weeks at a time – depending on usage – without a charge. It’s also not back-lit so, aside from conserving battery, you avoid a lot of eye-strain and blue light which keeps you up at night. In terms of features, the Amazon library, as well as book lending among your friends are only available on the Kindle device and not the app.

Sony’s Walkman was a big hit when first released – an easy to carry music player with headphones. Once CDs came around, portable CD players, though bulky, were fairly popular. Both became relatively obsolete, however, once iPods and MP3 players hit the market. Now though, every smartphone has the ability to store and play music. With longer battery life and more storage space on our smartphones, a second device exclusively for music seems a little unnecessary, so few of us are likely to purchase both.

Gameboy, PSP, Nintendo DS – handheld gaming was around long before cell phones. With all the games available on our smartphones though, are we likely to still invest in these devices? The short answer is yes. Plants Vs Zombies and other phone games are a great way to occupy our hands while we’re on the bus or in line at the DMV, but a dedicated console offers a much better gaming experience. Aside from better features and an overall better gaming experience, most parents who aren’t quite ready to entrust their child with a phone are happy to let them entertain themselves with a PSP.

Though smartphones and tablets have come a long way in a short space of time, they’re not quite ready to take over as our sole tech item. For some years to come, they’ll stay alongside laptops, e-readers, and Gameboys. The camera flash on your phone though – that’s your new flashlight, no more keyring torches.

What is a market?