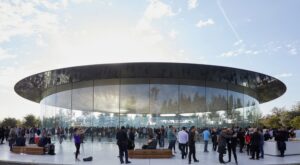 Apple’s 2017 keynote event was held on the 12th and came with many announcements. From the iPhone X to the iPhone 8 and 8 Plus via the connected Watch Series 3. Here’s what to remember from the Apple conference.

Even before the beginning of the keynote, Tim Cook made a sensation on twitter by evoking the Steve Jobs Theater. The 1,000-seat amphitheater is located within Apple’s new headquarters, the Apple Park. Last project imagined and validated by Steve Jobs, the complex is simply extraordinary.

During the keynote, Tim Cook explained that Apple Park is consistent with Apple’s “values” towards an environmentally friendly ecology. It uses 100% of renewable energies, with over 9 000 trees planted. In total, Apple has invested 5 billion in this building.

For the premiere of the Steve Jobs Theater, Tim Cook began by paying tribute to Steve Jobs. For the CEO of Apple: it would’ve been normal that Steve inaugurates this amphitheater. And as a reminder, added that Steve Jobs has, however, already left his imprint in the history of the Apple brand.

As usual, Apple boasts the sales of its connected watch. The American giant evokes a growth of 50% and self-proclaimed biggest seller of watches in the world (in front of Rolex, Fossil …), but advances no specific figure. We still get a figure though, that of customer satisfaction (97%).

After this small session of self-satisfaction, the Apple Watch and system watchOS4 were introduced. Apple confirmed that it is interest in health and announced that the watchOS 4 will improve heart rate sensoring and will send you a notification of any cardiac arrhythmia. Expect this watch by 19th September, 2017.

Apple also confirmed the arrival of the Apple Watch Series 3. This new connected watch is 4G compatible and will therefore be able to operate more autonomously.
Less dependent on the iPhone, it will also be more powerful (new dual-core processor) and less energy-consuming.

Small technical point, the antenna is located under the screen and the watch embeds an eSim (virtual SIM card).

After the Apple Watch, it’s Apple TV’s turn to be put forward. Not surprisingly, Apple confirms that its Apple TV goes to 4K and thus benefits from a more powerful processor (A10X).

The US firm specifies that the 4K content will not cost more and you will be entitled to beautiful screensavers as well.

Once again, pre-orders will start on September 15th and Apple TV 4K will be available on September 22nd. This new model will be sold starting at $ 179 for the 32GB version and $ 199 for the 64GB model. The old model is still available for $ 149.

Apple finally presents its iPhone 8 and iPhone 8 Plus, two new models that look very similar to the previous ones ( as suspected).

Both models feature a glass back and True Tone technology.

As for sound, Apple announces 25% more speaker power than those present in iPhone 7.

These two new iPhones take advantage of an A11 chip that has the sweet name of “Bionic”. This new processor comes with six cores and Apple specifies that the two fast cores are 25% more powerful than the cores of the A10 chips in its earlier versions. The other four cores (slow cores) are up to 70% faster than the A10 cores.

One more thing: the iPhone X!

Very beautiful staging from Apple with this One More Thing that reminds us so much about Steve Jobs. The iPhone X (iPhone ten) is now official and comes in two colors (black and gray).

The build and design

It was known, through rumors, for months and now official. Apple bids farewell to its home button and unveils a device with a borderless design. Like its little brothers, it is entitled to that glassy build, but stands out with steel instead of aluminum.

This new phones comes with a Super Retina Display. Behind this name is a 5.8-inch OLED display with a resolution of 2,436 x 1,125.

Without a home button, you must now touch the screen to wake it up. A process widely used in the Android competitor that also offers the “double tap” function.

Apple is now introducing FaceID, a feature that is expected. The firm explains that the sensors at the top of the screen allows the user to unlock the iPhone X with facial identification, even in the dark.

To make it work, the firm says it developed a special chip called A11 Binoc neural engine. However, it should not be expected that performance will increase because this iPhone X has the same A11 Bionic chip as in the iPhone 8.

For the photo part, the iPhone X is based on a double vertical sensor of 12 megapixels. For this very high-end model, both optics benefit from optical stabilization.

Apple announces a battery life up from the iPhone 7 (+2 hours) and confirms that its new iPhone comes with wireless charging. To celebrate this announcement, the American firm unveiled its new charger, the “AirPower”.

Why you should consider Investing in the blockchain technology and crypto currencies.