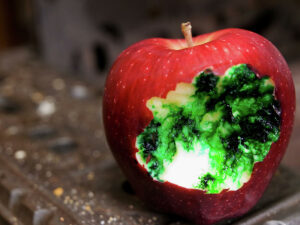 I’d tuned into the Apple World Wide Developer’s conference a tad late and missed the opening video but when I went back to check my notes on the keynote I had a WTF moment. Watch the start of the Tim Cook keynote for the show. To save you time it starts with a video of a guy who is brought into what looks like a data center, he is kind of an idiot. He unpacks his stuff and then wants to plug in his new age desktop waterfall and pulls the plug on what looks like a server or network tower in order to do this. When that component goes down it causes a cascade failure for all of the iPhones, Apple Watches, and iPads in the world. This collapse turns the world into a Mad Max future where cars don’t run, there appears to be no power, people are revolting, and everything pretty much sucks.

The stated message was that the world depends on apps, but what the film seemed to showcase was that there is single point of complete failure for the entire Apple ecosystem and if it goes down our world collapses with it.

Let’s talk about why it is really stupid for Apple to give folks the ideas that the platform is massively vulnerable and this vulnerability could destroy lives. You know I might be able to just stop there…

The Appearance Of Security

One of the things firms in Apple’s space work hard to create is an image of security and reliability. We live on our devices, particularly our phones, which is why Samsung is currently spending a ton of money showcasing the quality controls they put into building their products. Just a few months ago their flagship phones were catching fire and failing catastrophically which cratered sales and put their entire brand at risk, this was made worse when their top loading high-end washing machines started exploding. So, they are spending a ton money attempting to restore trust and recreate the impression that they won’t fail their customers again in the hope they won’t lose more of them to Apple, LG, HTC, Motorola, or some other large competitor.

IBM and Cisco, who Apple is partnered with, spend millions on their corporate image so that people in their space trust them to execute. They want you to believe, and they work hard in terms of assuring that belief isn’t misspent, that they will always be there when you need them.

The idea of them running an ad where they showcase that by simply pulling a three prong plug their entire eco-system would fail wouldn’t even make it through someone’s kid, let alone all the way through execution.

Currently Apple and Qualcomm are pounding on each other with regard to Qualcomm’s licensing fees. Apple is arguing that what Qualcomm does, which is basically assuring that products like iPhone actually connect and function reliably, is trivial and not worth the money they are paying. This video showcases that were infrastructure to fail, or much of what Qualcomm provides under license, not only would Apple fail but so would the world not only potentially supporting Qualcomm’s point but suggesting that, given the massive risk of failure and the criticality of the technology, that Qualcomm likely should be charging far more. I mean how much would a technology be worth to you if it prevented you and everyone you knew from being homeless and at the “End of Days”. I mean no one, but no one, would want to live in a world like that.

I’d be surprised if Qualcomm didn’t bring this thing into court to make their point. “See even Apple agrees that what we provide is priceless, rather than reducing our price we should be increasing it”.

Wrapping Up: Steve Jobs Is Spinning In His Grave

Jobs worked tirelessly to protect the Apple brand and image. The products, especially when they weren’t good quality, (like when he first took Apple over), were always positioned as the absolute pinnacle of design and quality. Cook’s video not only fundamentally brings into question whether the people that created it understand how the Apple eco-system actually works (here is a hit, server towers don’t use three prong plugs, and pulling the plug on any system, because they are redundant, would not catastrophically collapse the world. And, because your apps exist locally, your apps wouldn’t suddenly disappear either. We call the practice of creating false concerns about a platform FUD, for Fear, Uncertainty, and Doubt. It is done by one competitor to another all the time. This is the first time I can recall seeing a firm create FUD on themselves.

Why they would want to apply otherwise suggests that Apple marketing has seriously lost its collective mind and, like a lot of things, this doesn’t bode well for Apple. On the other hand, Qualcomm is undoubtedly really, really, happy they did this.

No this doesn’t bode well for Apple at all…

The Right Way to Collect on a Small Business Debt

Did you know that high quality sleep is essential for good health?