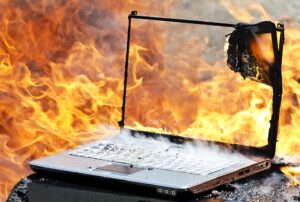 This week Qualcomm announced they’d invested in an obscure company called Amionx. I looked into this firm as a result and what I found out was fascinating. You see we’ve had a big problem with Lithium Ion batteries and their nasty tendency to catch fire when compromised. This is near and dear to my heart not just because I was the lead analyst on batteries in the US for a number of years but because a big Lithium Ion battery almost burned down my house while I was in it. This burning battery problem has resulted in massive laptop and smartphone recalls with the latest taking out Samsung’s halo phone and doing massive damage to Samsung’s brand largely because the FAA kicked the phone very vocally off of planes.

What Amionx does is makes an in-battery technology that operates like a circuit breaker and stops the core cause of a Lithium Ion Fire, an internal fault in the battery. But a similar approach might make it impossible to turn a laptop, smartphone, tablet into a bomb and preventing what looks like a coming ban of all of these devices on most, if not all, flights.

One of the interesting things we learned about the laptop battery failures a few years back was that prevention technologies outside of the battery often aren’t effective. I spent an evening arguing with a PC Company CEO (when I should have been spending it romantically with my wife watching the sunset in a hot tub) arguing that he had to do a recall. He argued that his laptops had superior technology that would prevent the fires that other laptops that had this same failing battery technology were using that would prevent the fires everyone else had experienced. He refused to do the recall and the very next day one of his laptops caught fire forcing him to reverse that decision with a significant amount of personal and corporate embarrassment.

The issue is that when a battery typically fails it fails due to a problem in the battery, not a problem with a short in the system (which can be addressed by some kind of system level breaker) which means that even if the battery isn’t in a laptop, smartphone or tablet it could still catastrophically fail and catch fire.

Lithium Ion batteries burn hot, which I clearly discovered, in fact hot enough to melt metal like Aluminum (commonly used in planes and cars) it is a nasty fire to put out particularly given that the remaining cells in the battery often short out themselves and generate massive amounts of electrical heat (making smothering largely ineffective. This makes it critical that you prevent the short on a cell by cell basis both to protect the battery from initially catching fire and preventing a cascading failure between cells if one of them does catch fire.

This is why the Amionx approach is so interesting, by being inside the battery it actually gets to the core of the problem thus potentially fully preventing it.

Now if I have to have this technology in a battery before that battery will be allowed on a plane this also provided a way to determine if a battery is a battery or a bomb. Because not only will a non-compliant battery not have the needed technology but neither will a bomb and scanning for and assuring the Amionx technology was in any plane bound laptop would, in theory, also prevent any laptop bomb from making it on board as well effectively addressing both problems, explosive batteries and explosives in laptops (or anything else).

Wrapping Up: Getting To The Heart Of The Problem

Whether we are talking bad batteries or explosives the goal should be to prevent the event not move it from the cabin into the luggage compartment, which appears to be the current foolish plan. Recall that batteries burn hot and melt metal which means, at least, if they go up in a cabin someone can deal with the problem before it spreads to the rest of the plane but, in the luggage, one burning laptop could catch every other lithium ion device in that luggage compartment on file which would be far more likely to down the plane catastrophically than one laptop ever could. In short, the current plan appears to be taking a big problem and changing into a far more likely catastrophic event which is hardly the right direction.

On the other hand, using a technology like Amionx along with a way to assure compliance could prevent both Lithium Ion fires and laptop bombs which would make crashing the plane far less likely. Given I fly a lot, that is the path I’d personally prefer the FAA take.