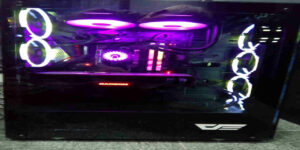 One of the ways I’ve been dealing with (or hiding from) the lack of certified election results in the US this year is building new desktop PCs for myself and my wife.  I currently use a Threadripper workstation as my primary system, and when I got it earlier this year, it pretty much blew anything else I’ve tested out of the water.

So, as therapy, I built two new systems, one using the AMD Ryzen 9 5900 processor and parts I had sitting around, and another using their even faster 5950 processor and current high-performance parts.  Then I benchmarked everything and, holy crap, not only was it a lot cheaper than I thought it would be to use the high-performance parts but man, were they ever worth it.

Let’s walk through my experience this week.

Let’s start with my Threadripper system.  Falcon built it, and they did an impressive job.  It worked right out of the box, I had no driver issues, and within minutes of unboxing it, I was up and running and playing my favorite game “Ashes Of The Singularity”.

The best benchmark, it turns out, is Geekbench’s multi-processor score, and it was a whopping 127,631.  If you have 32 cores, you are going to light that benchmark up.

This configuration uses the 3970X Threadripper and the Radeon RX 5700 XT Graphics card, and 64 GB of memory.  This PC is a real workstation similar to what the Falcon Northwest site prices out around $5K, so it is no cheap date.

So really not that shabby, but now lets go my “budget” off the shelf parts system.

The scores were pretty impressive.

The graphics card under-performed the newer card in the Threadripper. Except for that massive multi-core score on Geekbench, the processor did impressively well against the far more expensive Threadripper part.  (Be aware that most photo and movie editors would run much faster on Threadripper).

For the faster memory and the better M.2, the delta in price was around $160 and worth it.  The extra $250 for the 5950 wasn’t worth it for what turned out to be a slight performance bump in the 3DMark and Geekbench scores.  That makes the 5900 a huge bargain.  The graphics card made the biggest difference, and that Radeon 6800, as others have pointed out, is an impressive part.  The Deepcool water cooling part used two screws to attach the heat sync making it one of the easiest to put on and take off any water-cooled system I’ve yet used; the Phantom Black ATX Mid Tower case looks fabulous for the money (and it is straightforward to work with). I liked the MSI Gaming Plus X570 motherboard better than the Gigabyte Aorus Master (largely because when I had a BIOS problem, it pointed me to the problem more quickly).   It doesn’t have wireless Wi-Fi 6 on the board, but you can add it with a card for under $40.  This all means that for around $1,800, I could build a system like the 5950 system above and probably blow the doors off most everything else close to that price out there on benchmarks.

But you know, the best part of building both AMD systems was I wasn’t watching the news, I wasn’t getting aggravated about the US election, and I wasn’t stressing out on the virus.  Playing with the systems has been great but building them was proper therapy and that alone was worth the money.  I mean, you can build the system safely at home and then use it to play the game to your heart’s content, all while staying safe from the damned virus.

One final thought is that damn; this isn’t your father’s AMD; these are impressive scores that rival full-on workstations.  AMD kicked some butt this year!