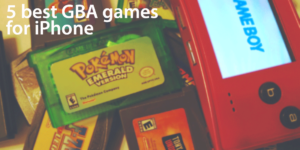 The main issue with Ruby and Sapphire is incompatibility with Pokemon Gold/Silver, but it’s for a good reason – they’re the only logical continuation of the original Pokemon series that don’t allow you to import your favourites from the previous generation. However this disadvantage turned out into a big step up and allowed the developers (Game Freak) to bring massive additions, improvements and dozens of new features, which are still integral to the series, including abilities, natures, double battles, and the refinement of the IV and EV system. Ruby & Sapphire are still the most innovative games in the whole Pokemon universe and we have to thank them for the richness and depth we enjoy in the series today. So if you are a freshman and just started training pokemons that’s what you must play.

The Legend of Zelda: The Minish Cap

The Minish Cap is undoubtedly one of the most underrated and underappreciated chapters in the entire Zelda series. The gameplay basics are fundamentally identical to that of past games in the series, but the Zelda model is so entertaining. The Minish Cap is a perfectly balanced mix of new and old developed by Capcom rather than Nintendo itself, which completely nails what the series is best at. It feels like a Zelda game yet also sets itself apart as unique. The overall structure of Minish Cap is wonderfully reminiscent of A Link to the Past, while Link’s ability to shrink and explore the teeny-tiny world of the Picori feels totally novel. The game is a little on the short side if you just rush through the main dungeon progression, but there’s a vast array of exciting optional side quests to undertake. To this day it remains Link’s best handheld adventure which represents the end of an era for this hallowed franchise. It’s a superb game in its own right that any fan of video games shouldn’t be without.

Final Fantasy VI is one of the best games in the saga, if not the best, and the GBA port is just the GOTY edition of the classic adventure. Unlike the irreconcilable smartphone and PC ports, Square decided to save the atmosphere and kept the original graphics. Nevertheless they expanded the world and brought two new areas, four new espers, three new spells, and a new enemy to this version. The game’s combat system is ridiculously robust and offers completely different techniques for every character involved and each hero can be customized in multiple ways. There’s also a huge amount of hidden material with remarkable sidequests, furious boss battles, and other high quality content still stands up today. Even with its 16bit visuals and familiar concepts it set the bar for RPGs and become one of the greatest games the world has ever seen. It’s all happened 10 years ago, when games were definitely better.

If you ask somebody about Nintendo franchises that sank into oblivion, perhaps the answer will be Advance Wars, but there’s another one competitor. Maybe there is the only one more mysteriously disappeared game in the world – Metroid. The Fusion (originally it’s supposed to be Metroid 4) arrived in 2002, while gamers spent their 2000s sitting in couches enjoying Nintendo’s home consoles and exploring the third dimension. Unlike controversial Metroid Prime for GameCube, it’s the true sequel to the blessed Super Metroid. By the way they implemented interesting feature – completing Fusion unlocks the Fusion Suit and OG Metroid as an addon for Prime. The game holds your hand more than its predecessor with cinematic graphics and unlocking new abilities crushing X parasites is a pure joy. Well written scenario is also moving the Metroid saga forward, as it’s the last game in the series chronologically. Despite the fact Nintendo released several spin-offs, can’t wait to see the continuation of the original story. It’s been 15 years already.

Speaking about the early days of the Mario Golf franchise it’s hard to forget about one of the series’ best blends of golfing and incredibly fun level-up system of Advanced Tour. While most golf games would suffice with a career mode, Mario Golf takes it a step further with a full-on RPG-style story mode. Dominating the courses of the Kingdom have rarely been as fun, as the game’s sense of living out a virtual golf star’s life feels expansive yet focused. Plus, not worrying about grass stains while virtually walking from hole to hole is a nice bonus. It’s a good-looking GBA game with 16bit RPG inspired look, and it looks great for golf too. You might not love neither golf nor Mario, but you’ll love the mix of these ingredients.

And finally, how to get GBA4iOS?

– There are several ways how to get the app including sideloading and signing services. Sideloading is completely free, but you have to be tech savvy and have plenty much time. As far as it might be complicated for a regular gamer, so I suggest signing services. Some of them are free, some paid, nonetheless this is the fastest way to start playing immediately. If you choose the free option, be aware of revocations, cuz Apple do not appreciate emulators (they recall the app’s «license» and you are unable to use it). Paid services are revoke-free and the main difference between all of them is the price and the list of the apps available. I’ve chosen the Buildstore (builds.io), because they have pretty good feedbacks and the lowest market price $9.99 per year. For example, the alternative service called TuTu app costs $12.99 and I don’t know why. That’s too much for posting apps developed by others, I think. But it’s just my opinion, you should make your own decision.

5 Reasons That Companies Change Their Name When Expanding Abroad