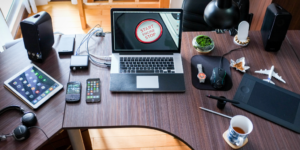 2017 was a huge year for Apple. In fact, despite not being a hardware based company, they sold approximately 322 million gadgets last year alone, which included devices such as iPhones, iPads, Macs, Apple Watches, AirPods, iPods, Apple Pencils, Beats headphones, and Apple TVs.

Making matters even better, 2017’s gadget sales surpassed 2016 sales by nearly 7%, making it one of their best years in some time.

And, with the launch of the iPhone X, among other amazing Apple products last year, consumers were left to wonder what 2018 could possibly bring.

Now, we all know that Apple never publicly comments on any future product releases. However, there are a slew of people out there constantly investigating behind the scenes and reporting what they think may or may not release each year.

Let’s take a look at what you can expect to see this upcoming year in terms of Apple products, so that you can gear up to sell your MacBook Pro using a service such as Gadget Salvation. After all, offering the highest process on Apple devices such as MacBooks, Gadget Salvation can give you the cash in hand needed to invest in whatever the next best thing to release from Apple is this year.

But enough about that, let’s see what is coming!

I know, you are probably thinking to yourself who needs a new iPhone these days? But the truth is, not everyone was able to get in on the iPhone X last year. In fact, there are many people out there using outdated iPhones that are going to need new ones soon.

That’s why Apple is working hard (we hope!) to bring you new designs that will come with updated features the average iPhone user can appreciate:

Adding to that, there is talk about new features on the iPhone X, though we am not sure what else could be added to that beast.

Though all of this is speculation, and Apple typically doesn’t make announcements about iPhones until September, it’s fun to think about how our phones are going to be in the very near future should we decide to upgrade.

Though unveiled last September, Apple’s HomePod device, complete with high-end speakers and Siri capability for audio listening, has only just made an appearance.

Some say it’s late because the team at Apple was adding new Siri functionality to make it even more versatile. Others say they were waiting to see what competitors, such as Google and Amazon, would release early this year so they could compete. Others say they were behind because some of the features relied on third-party developers.

Whatever the case was, the Apple HomePod is seemingly missing some features and can expect to be updated very, very soon.

The iPad Pro is set to see some new and exciting features this year, including a new A11X processor, additional RAM, and improved battery life.

However, what is really going to set this year’s iPad apart from previous releases is the introduction of the Face ID technology seen on last year’s iPhone X release. In fact, Apple has made changes to this feature such as the ability to use it in different orientations and the fact that multiple users can access their accounts on one device.

These changes to this advanced technology are perfect for the larger, more versatile iPad device. Not to mention, this will signal the loss of the home button, which is something Apple products continue to do as updates continue.

Another announcement Apple lovers can expect to hear about come the Worldwide Developers Conference refers to the new iOS release, iOS 12.

Marked to fix bugs and stability issues brought on by the iOS 11, that everyone complained loudly about, this new update is expected to include added features to both the newest iPad model and iPhone X, including quite possibly a picture-in-picture feature.

In the end, though we can never really tell what’s coming our way in the Apple world, it’s always fun at the beginning of the year to think about what one of the most technologically advanced companies in the world have in store for its consumers.

Significance of Secure Online Payment Solutions for Your Growing Business

A Step-by-Step Guide to Starting an LLC