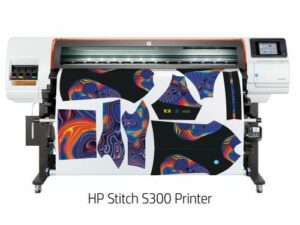 I have a dream, well not THAT dream I’m likely too shallow, but I have a dream that some day I’ll be able to open an app, design my own clothing, have it created by some blend of 3D and cloth printer to match my exact dimensions, and get it the next day in the mail (hell I’d be happy if I got it in the same month). Well, this week, HP took me close to that dream with the launch of HP Stitch their new Dye Sublimation printer which is part of their effort to redefine manufacturing.

Let’s talk about the HP Stitch this week and look ahead to my dream of super customer robot created clothing.

We tend to think of printers as antiquated technology, but they actually were the first personal robots. Granted they were pretty focused but they can take a blank sheet of material and turn it into a newspaper, a book, a report, and the result is mostly what we read from (and most of us still do) instead of the eReaders and Tables that were supposed to make them obsolete.

Of course, the most robotic of printers are the new 3D printers that create amazing things out of plastic, metal and even ceramics these days (HP doesn’t have a ceramic printer yet) for both prototyping and production. One amazing thing that my car racing bodies (don’t tell them) don’t yet know is that the best bespoke intakes for BMWs are created by a firm called Zigzag which creates higher performing, more reliable, products than BMW did for older cars that are raced.

But these things are game changers.

Now what HP Stitch does is uses Dye Sublimation in an advanced paperless process that can rapidly and inexpensively print on polyester. Now, if you are like me, I thought Polyester, crap here we go back to the 1970s and leisure suits, but polyester has come a long way in the last 30-40 years and can both emulate and outlast cotton today. More important because it is potentially more durable than cotton or paper but can used in similar functions uses can range from clothing and upholstery to banners and signage.

But where I’m mostly focused is clothing because I think it would be cool to create clothing with custom treatments that would showcase the things I’m interested in (like Avenger’s: Endgame, my pets, my cars, or the teams I support) but in the way I want to showcase them. Like, for instance, I think it would be cool to create and wear a Shield uniform (yes I’ve never really grown up), or have a Jaguar outfit that had my car going through a tunnel starting from my back and emerging from my front, or had a shirt with my pets worked into a logo on my pocket, or had a Game of Thrones dragon arraigned like a body tattoo (but on the shirt not on my way to pain sensitive flesh).

In short, I’ve always wanted to design my own clothing but, given it will likely be trial and error process, using a tailor has never been financially viable. But this printer could change that so I’m surprisingly excited about this effort.

Wrapping Up: Next Steps

Now I think the game changer would be if HP could take what they have learned from 3D printing in terms of complex automated process and combined it with this cloth printer so that rather than printed cloth you’d end up with actual complete clothing as the end product. Clothing factories clearly do this at scale but setting up that older process isn’t easy and it certainly isn’t practical for one off designs but, if you could actually print a finished product that could eventually lead to a home offering where you could print your clothing at home much like, eventually, you’ll have a home 3D printer. I even think the polyester could be reconstituted so that rather than cleaning, you could recycle the clothing and have a unique new outfit every day of the week.

We are years off from that, but this HP Stitch is a step in that potentially amazing future.

How digital transformation is transforming and innovating the financial industry

Ideas to Help You Plan the Perfect Party Right Now