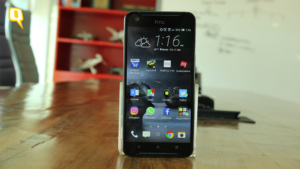 HTC’s ‘Desire’ and ‘One’ line-up have constantly added new models at competitive price points to keep the brand buzzing in the market. Their latest, HTC One X9, has a metal unibody design and is priced at around $420. But does it work as good as it looks?

The HTC One X9 has a 5.5-inch 1920×1080 Full HD display, packed in a metal unibody. The brushed metal back and the 2.5D curved Gorilla glass on the front makes it look much more premium. The naked antenna lines across the bottom of the smartphone are reminiscent of the Apple iPhone. However, HTC claims that the design was originally theirs, so we’ll leave it there.

With rounded edges at the back, the phone is easy to hold, but some might find it a bit slippery. HTC One X9 features two front-facing Boomsound speakers and runs on Android 6.0 Marshmallow. The 3,000 mAh battery easily lasts through the day.

The smartphone has a MediaTek Helio X10, octa-core processor with 3GB of RAM. With 32GB storage on-board, which can be upgraded to 200 GB, it’s a powerhouse indeed. The phone responded smoothly even while running graphic-intensive games such as Asphalt 8.

Another highlight of the smartphone is the camera.The 13-megapixel rear camera is embedded in a classy, chrome plate. The camera is snappy, and produces good images under normal conditions. It supports 4K, slow-mo and hyper lapse video recording. The 5-megapixel selfie shooter has a Live Makeup feature which clicks bright and clean photographs.

HTC One is competing with the likes of Xiaomi Mi 5, and hence the smartphone feels a bit lacking in terms of features. There’s no fingerprint scanner on HTC’s One X9, which wouldn’t hurt many smartphone users, but definitely kills the fun as the feature is becoming a standard in this range. We would have also preferred cleaner low-light imagery as photos clicked under low-light are quite grainy.

And we may be nitpicking here, but it would have been good to see a quick charging feature, considering its price and its competition.

The HTC One X9 lacks a fingerprint scanner.

HTC One X9 has enough going for it, even after falling short against its rivals in a few departments. The phone feels sturdy in your hand due to its build quality. If the price suits you, then the HTC One X9 is definitely a good contender.

The 2017 Maserati Quattroporte Gets a Stylish Makeover