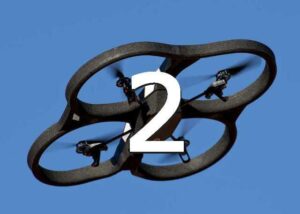 A few days ago I wrote about the growing problem with drones (quad-copters) flying into or over places where they don’t belong.

I suggested that perhaps we should regulate quad-copter capabilities that are sold in the U.S. – not let them weigh more than 55 pounds, not fly beyond ‘line-of-sight,’ not fly above 300 feet and perhaps have built-in circuitry that prevents them from flying over beacons that transmit a ‘no fly’ signal. Mike Williams at the University of Delaware strongly disagreed with my article and politely suggested that I, “Please stop writing about things that you clearly know nothing about.”

Mike commented that “if you think that we can regulate the abilities of drones to any degree of success, you are sadly mistaken. One of the drivers of the quad-copter market (the device most people think of when they hear “drone” in a domestic context) is that it is easily built from off-the-shelf components that are used for other legitimate purposes. The knee jerk reaction of adding laws and regulations to solve a problem which is best addressed by holding individuals accountable for their actions is one of the fundamental problems with this country today.”

Mike also contended that, “Placing the responsibility of controlling where the drone flies on the manufacturers will only drive manufacturers out of the market. Quad-copters will continue to be made by individuals and hobbyists (using the off the shelf components mentioned earlier).”

In the comment section I asked Mike to explain to me how exactly we should track those people down so that we can hold them accountable. And I asked what proportion of quad-copter owners that violate FAA regulations and Federal laws built their own quad-copters from off-the-shelf components or did the vast majority of them simply purchased their drones on Amazon.

I also suggest that key government locations might be able to implement a signal jamming technique targeted at the 2.3-2.4 Ghz and 5-5.8 Ghz ranges used by most commercial quad-copters (unfortunately these are also the same frequencies used by Wi-Fi 802.11 – perhaps the FCC aught to address this issue) and perhaps other frequencies such as the 72 MHz range that are used for other types of model aircraft.

Personally I don’t believe putting restrictions on quad-copter abilities would drive manufacturers out of the market (if some left there are plenty of others who would be more than willing to take their share of the U.S. market). But in the interest of compromise, how about requiring manufacturers to simply list the frequencies used (which they do already) and provide the FAA with a list of their command codes?

That way airports, military installations or the White House could set up receivers that would scan for nearby transmissions in those frequencies and if they detect any signals they could transmit the various ‘return to base’ or ‘land’ or ‘turn off’ signals for the most common quad-copters. And I don’t think it would be too much of an imposition to require all quad-copter manufacturers to adopt a universal ‘land now’ signal code.

(If a rogue quad-copter can’t be brought down using these transmissions then I would suggest a 12 gauge, semi-automatic shotgun with a skeet choke using a No. 7 load.)

Setting up triangulated scanners tuned to common quad-copter frequencies also could help pinpoint the location of the person controlling the devices (although if you are going to go that far then you might as well scan all RC channels – just in case someone tries to ram the White House gate with a RC car loaded with explosives).

In cases where scanners might be impractical such as in emergencies or fighting forest fires, a government agency should be allowed to broadcast ‘return to base’ or ‘land now’ signals over an entire area (perhaps mount the transmitters on firetrucks).

If someone flies their quad-copter over a restricted area and it never comes back then tough noogies! You shouldn’t have been flying it there in the first place!

In the debate between quad-copter owner’s rights to fly wherever they want versus protecting public safety, public safety should always come first. And if that means implementing legislation, restrictions, prosecutions and technology then so be it.

I will continue to write about any damned thing I want including articles on topics that I clearly know nothing about. At least I’m trying to offer some possible solutions.

An operating system should be invisible