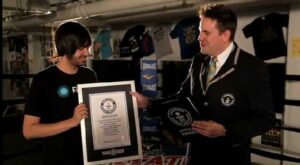 It took Filho a scant 17 seconds to text the phrase, “The razor-toothed piranhas of the genera Serrasalmus and Pygocentrus are the most ferocious freshwater fish in the world. In reality they seldom attack a human” on his new iPhone while it took him 18.19 seconds to text the same phrase on the Samsung Galaxy S4 last May.

Obviously the kid has a lot of free time on his hands (and most probably calluses on his thumbs that could break bricks).

But hey, my son is a world-famous yoyo freak (Google ‘Guy Wright’ if you want to see some mind-blowing yoyo tricks) and I spent an inordinate amount of time when I was young teaching myself how to juggle and do stupid coin tricks so I can’t criticize anyone for honing a skill that is basically worthless.

So congrats to Marcel on his new world record. A truly newsworthy accomplishment.