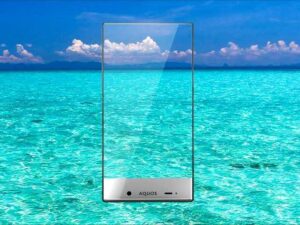 Sharp is about to bring the world’s first completely bezel-free smartphone to western countries after rumours emerged that one of its two new handsets is headed for the US.

The Sharp Aquos Crystal smartphone sports a 5in screen that fits into a body that is barely a millimetre larger than that and is reportedly ready to be released on Sprint at an event taking place tomorrow, according to Phone Arena, that invites guests to “Take the edge off”.

Apart from the revolutionary bezel-less appearance, the screen has a 720p resolution and it runs on a Qualcomm Snapdragon 400 quad-core processor that is supplemented by 1.5GB of RAM and onboard storage of 8GB with a microSD slot for expansion.

It has a 2,040mAh battery as well as a Harman Kardon sound effect engine that can support Clari-Fi, which restores information lost during music compression, “LiveStage” streaming, and native support for the Harman Kardon ONYX Studio Bluetooth speaker.

Dimensions-wise it measures 5in in height, 2.6in in width, 0.39in thick and weighs in at 5oz, making it thick but confirming the screen’s size has a tiny slither of space round the edges.

SoftBank, Sprint’s parent company, has already released the Aquos Crystal and Crystal X on its network and Phone Arena reports that the US launch will happen on 19 August before it is available to customers on 29 August at Sprint retailers.

Pricing it yet to be announced and there’s also no indication whether European consumers will eventually be able to lay hands on the bezel-less design.