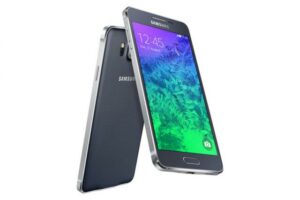 Samsung has finally unveiled its Galaxy Alpha – which has been the subject of many leaks – with the company taking what it calls a “new design approach” with the handset.

In other words, it has listened to the many moans about the Galaxy S series and its plastic finish, and has brought out a handset with a metal frame, and more solid premium feeling build quality. Samsung boasts that the phone has elegant curved corners, and a soft matte finish on the rear.

The handset is also compact and light at 114g, and just 6.7mm thick.

As the Galaxy S5 hasn’t been selling nearly as well as anticipated – the device has actually been trailing the iPhone 5S and 5C, let alone the iPhone 6 when that emerges – this would appear to be Samsung’s move to stimulate fresh sales. Funnily enough, the Galaxy Alpha will be available at the start of September, just when the next iPhone launches (or likely just before Apple’s big launch event, which is pencilled in for 9 September).

Rob Orr, VP of IT and Mobile at Samsung UK & Ireland, commented: “Combining a stunning metal frame and slim, light weight design with the same powerful hardware and features you’d expect from a flagship Galaxy mobile device, the Galaxy Alpha is perfect for those that want style without compromising on performance.”

A Carphone Warehouse spokesman said: “Customers are increasingly viewing smartphones as fashion accessories and are therefore looking for a lifestyle product, not just a handset that has a high technical calibre, so the full metal frame – a first for Samsung – and on-trend metallic colours are a calculated move.”

He added: “Samsung hasn’t compromised on tech specs though and has included the latest innovations in health, fitness and biometrics including their leading heart-rate monitoring features. We know there are a lot of customers who don’t want to have to choose between style and substance for their mobile phone and the Alpha gives them both.”

As for those “on-trend” metallic colours, they are Charcoal Black, Dazzling White, Frosted Gold, Sleek Silver, and Scuba Blue (with the latter an exclusive to Carphone Warehouse).

Pricing is likely to be key with this model – it will be very interesting to see exactly where the asking price is pitched in comparison to the S5, given Samsung’s need to really fire sales up as the new iPhone emerges. However, the rumour mill reckons that the Alpha is going to come with a price tag that isn’t too far away from the S5…

70 per cent of Apple is men says diversity report

Murderer asked Siri where to hide the body