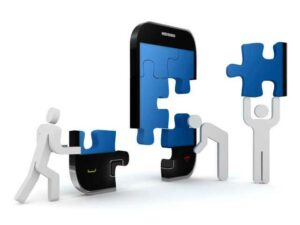 There are now more than one million apps in the Apple app store but a study by Deloitte’s showed that 80 per cent of apps get less than 1,000 downloads each. If we assume (very, very conservatively) that those apps cost an average of £6,000 ($10,000) to develop – that is at least £4.7 ($8) billion being wasted making apps no one uses.

In reality, the cost is often over £60,000 ($100,000), which makes the wastage around £47 ($80) billion. That is a lot of marketing and development dollars being spent that could have been better used on something else.

Of course, when an app works – as Whatsapp has shown with 450 million users across all platforms and a valuation of £11 ($18.7) billion – it really works.

We decided to step back and see what it meant to be truly “mobile first” as that is a buzzphrase that is being bandied about by a lot of companies.

In the early days of the web, publishers essentially took their offline print properties and ‘repurposed’ them for use on the web. Over time they realised that the web was an intrinsically different medium and they needed to develop content specifically for the internet. Only once publishers came to this realisation (and many still have not) did we get many of the highly trafficked content websites we have today – from Slate to The Huffington Post to the New York Times.

However, most of the companies who are going mobile now are making the same mistake, they are taking their web content and essentially resising it for a mobile screen, not appreciating that mobile is in many ways a fundamentally different medium from a website which is made to be interacted with on a laptop or desktop.

An analysis of the top five websites in the world (Google, YouTube, Facebook, Yahoo, Amazon) shows something equally interesting. They are all utilities that exist purely because of the internet – i.e. they are not pre-internet properties that were then repurposed. In fact, of the top 50 websites in the world only three – Microsoft (41), Apple (48) and CNN (49) – come from pre-internet brands.

We took this slew of statistics and came to two conclusions:

The one thing that most apps aren’t doing is really understanding the user. A smartphone is a very personal device. Understanding and anticipating the user’s needs are what makes an app great. One of our product managers mentioned that a great app was like the personal assistant who always knew what you wanted. This got me thinking of dining in a restaurant and the different types of dining experience we might have. I broke them down into three experiences:

The Fast Food– This app makes you do all the work and is ultimately not terribly satisfying. For example apps that force you to hunt around for things that should be intuitive, where you click aimlessly hoping something will happen and then suddenly crash for no reason – we’ve all been there.

The Irritating Waiter – The app that is incredibly intrusive, wanting to access all your Facebook details, your contacts and sending you pointless alerts every day.

The Perfect Waiter – This is the holy grail. The app that works perfectly when you need it, sends you alerts that really matter, is incredibly easy to use and leaves you feeling you’ve had a great experience.

Ajay Chowdhury is CEO of Seatwave