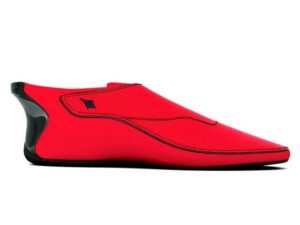 Forget smartwatches, or other wearables like Google Glass, as an Indian startup by the name of Ducere Technologies is targeting an entirely different area of the body for “smart” functionality – the foot.

Yes, the Lechal is a smart shoe or “interactive haptic footwear” which buzzes to give you feedback and directions on where you’re going, among other functionality.

The shoes are hooked up to your phone (Lechal is compatible with iOS, Android and Windows Phone) and the Google Maps app via Bluetooth, and they then deliver directions from the app straight to your feet with haptic feedback. If you need to turn left on a street corner, your left shoe will buzz.

The smart shoes can also record your path taken and distance travelled, and will be useful for joggers, being able to record the amount of calories burned just like a traditional fitness wristband.

From what’s shown in the promotional video you can also tag your location by stubbing your toe onto the ground.

The shoes were originally developed as a navigation aid for the visually impaired, before Lawrence realised there could be other applications for the smartwear in terms of the sighted.

You’ll either be able to purchase the full Lechal shoes, or smart in-soles for your existing footwear (again, as shown in the video above), with the price expected to be pitched around $100 to $150.

Google Maps feature will let you Explore Nearby stuff