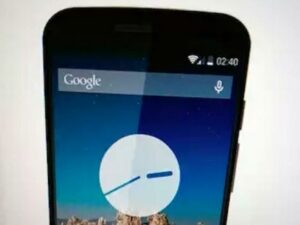 Motorola’s next flagship smartphone appears to have been leaked ahead of Google’s I/O developer conference.

The images show an Android device with a front-facing speaker and 5.2in display, making it larger than the 4.7in screen available with the Moto X.

The original phone, which came out earlier this year, was billed as a high-end device available from £380 SIM-free. The price for Motorola’s next phone has not yet been revealed, but it looks likely that it will come with an upgrade in terms of specs.

Rumours have suggested that the new handset will boast a 1080p resolution screen, 2GB of RAM and up to 64GB of internal storage along with a microSD slot, but these are all unconfirmed as of yet.

The full details for the new Moto X+1 are expected to be revealed at Google’s annual I/O conference. The event is hotly anticipated with the search engine giant also expected to reveal the next version of its Android operating system.