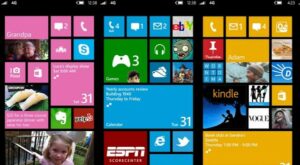 Despite only releasing Windows Phone 8.1 earlier this year, rumours persist that Windows Phone 9 will be launched sooner rather than later. With the most recent update bringing some pretty significant changes like Cortana and the Action Centre, anticipation is high for what Microsoft will bring to the next major release.

While most of the information revealed so far is unsubstantiated, there are a couple of rumours and facts that are worth keeping an eye on.

While it was previously suggested that we might see Windows Phone 9 by the second half of this year, this now looks increasingly unlikely. The most recent information, found in a leaked document on myce.com, suggests that a preview build of Windows Phone 9 will be available between April and September 2015.

According to Russian blogger, Eldar Murtazin, the interface will experience a complete overhaul and the tile based Metro style will be replaced. It is also thought that the interface will be the same on both tablets and phone and is likely to be more influenced by the Android operating system than iOS.

It has even been suggested that Windows Phone itself would be replaced by a single operating system, Windows 9, that would be used across phones, tablets and PCs.

New map website lets you drone around the world