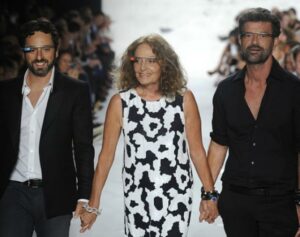 In the struggle to get its Glass eyewear looking more acceptable to the general public, Google has enlisted a new ally – namely fashion designer Diane von Furstenberg.

In conjunction with the designer, Google has announced the DVF Made for Glass collection, which will bring trendier versions of the specs to the intrepid Americans who are part of the Glass Explorer Program.

The new Google Glass models will be on sale via +Net-a-Porter (a luxury fashion website) and the Glass site itself, with a choice of five frames and eight shades you can mix and match for your own look. They’ll go on sale in the US from 23 June, with both prescription lenses and sunglasses available.

In a post on the Google+ account for Glass, the firm said: “In 2012, we gave you an insider’s view of the +DVF Spring 2013 runway show with DVF [through Google Glass]. We’re honoured to collaborate with her talented team again. Like Diane says, ‘technology is your best accessory.'”

As you can see in the above pic, which shows the “orchid mist flash blue” model – at least according to Google’s screenshot naming conventions – the results are certainly quite stylish looking in terms of the actual shades (as long as you don’t mind the DVF logo in the corner). However, the display arm still looks rather clunky (and we’re not keen on that shade of blue it sports, either – but then, what do we know about fashion… we used to wear tie-dye shirts in the eighties).

Of course, Google has already signed a deal with Luxottica (back in March), the maker of Ray-Ban and Oakley sunglasses, to produce trendier looking goggles. The company is clearly serious about trying to get the aesthetics tuned to be more acceptable for a mainstream consumer audience. For us, though, it would be good if they could make that display arm a touch thinner if possible (easier said than done, of course, as the hardware has to go somewhere).

Robot love is in your future